Home to the Royal Signals Museum

Telling the story of military communications from flags to fibre, semaphore to cyber

The museum tells the fascinating story of Blandford Camp – formerly home to the Navy and Airforce.

If I should die – The Soldier was penned by Rupert Brooke when based on Blandford Camp. Sadly Brooke was a casualty of WW1.

In 1944 the first of five US Army hospitals was established in the camp ready to receive the wounded from the invasion of Europe. A memorial service is held annually in November on the camp at The Roosevelt Garden and Memorial in remembrance of those who died.

Via Navy, Airforce and Army…

Blandford Camp, now the ‘Home of The Royal Corps of Signals’, has its own fascinating history which is portrayed in a number of Museum displays.

The camp boundaries contain numerous prehistoric sites. The first recorded use of the site was as a racecourse. Race meetings began in the late 16th century with an annual race week held until the end of the 19th Century.  Military use of the site began in the 18th century when local volunteer units used it as a training ground.

In 1806 a Royal Navy Shutter Telegraph Station was built near the racecourse on the site now known as Telegraph Clump. This signal station was on the London to Plymouth route which and was closed after the Napoleonic War, though the site remained occupied until 1825.

There is an interactive display of the Shutter Telegraph in the Museum. 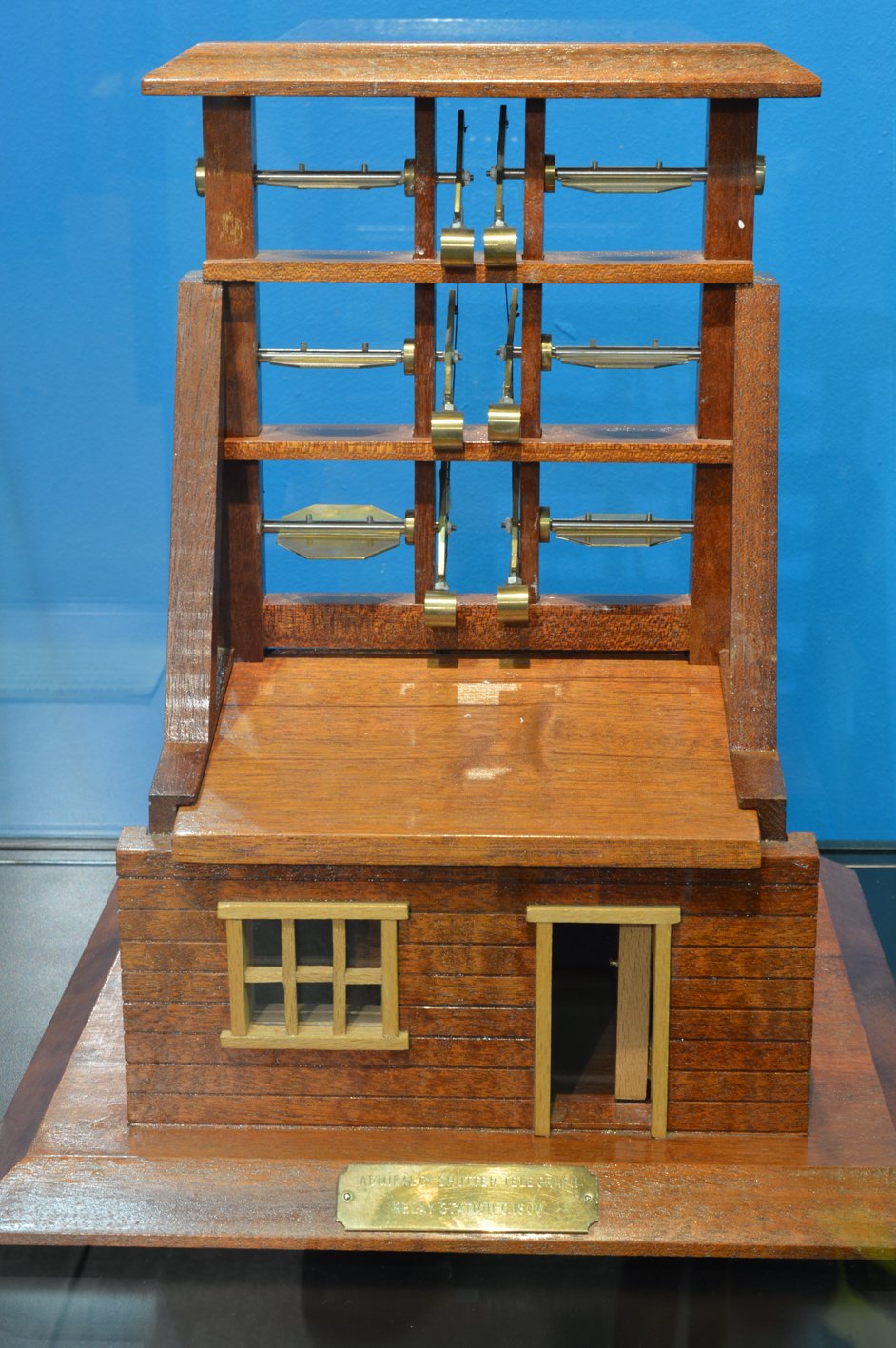 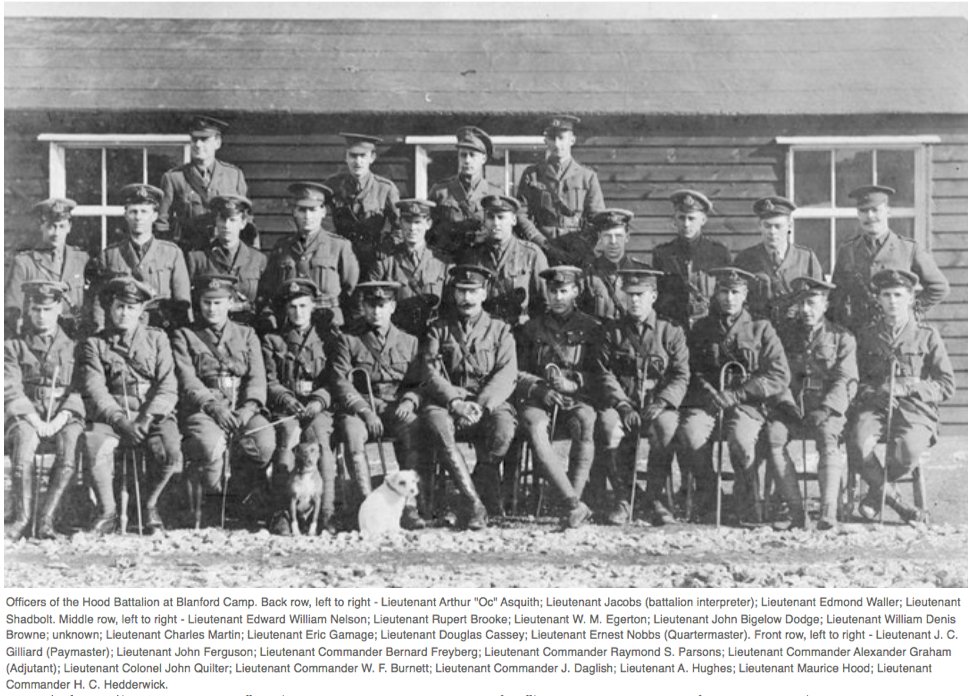 In November 1914 the Royal Naval Division (RND) established a base depot and training camp on the site with a German POW camp set up alongside. During this period poet Rupert Brooke was stationed in Blandford with Hood Battalion, Royal Naval Division.  Here he penned his renowned poem ‘The Soldier’.

This was the fifth and final of Brooke’s 1914 war sonnets. This sonnet begins by talking about the prospect of death.

If I should die, think only this of me:
That there’s some corner of a foreign field
That is for ever England…

Rather than focus on the brutality of death (as so many other war poems did), ‘The Soldier’ portrays death for England as salvation for the soul and thereby a desirable fate, a noble sacrifice.

Sadly Brooke died in 1915, one of approximately 17 million to lose their life during the First World War. 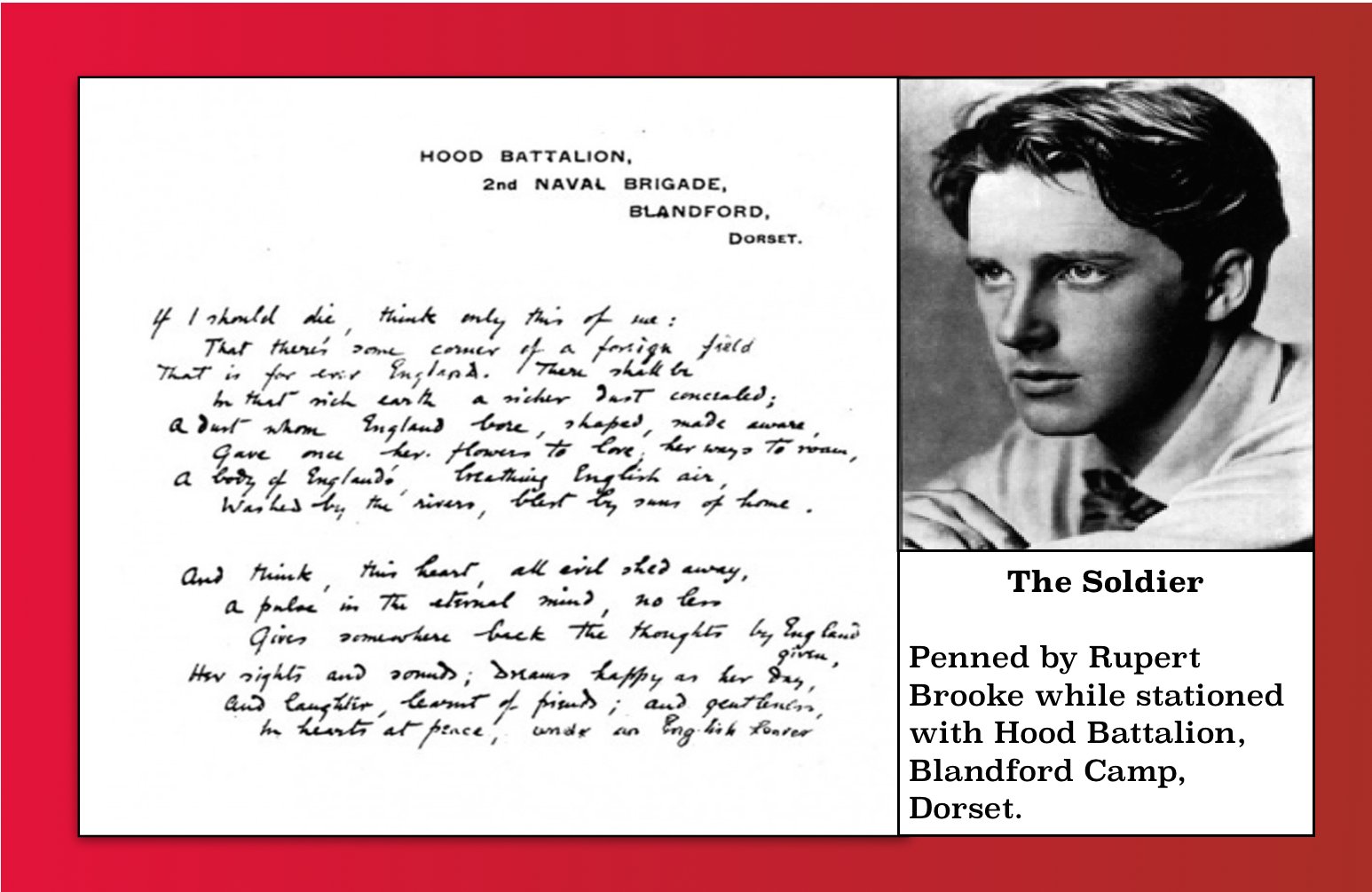 From Navy to RAF to Army via US 22nd General Hospital

The RND moved out in 1918 to be replaced by the Royal Air Force Record Office, Equipment and Personnel Depot and Discharge Centre. At the end of 1919 the camp was closed and both the wooden huts built for the RND and the camp’s railway line were removed and the site returned to agricultural use. In 1939 the camp was reactivated as a mobilisation and training centre for reservists called up to meet the threat from Nazi Germany.  Later anti-aircraft units of the Royal Artillery also trained on the site and it became a Battle Training Camp.

In April 1944 the first of five US Army hospitals was established in the camp ready to receive the wounded from the invasion of Europe. Having treated some 20,000 patients, these hospitals were closed after VE Day. The Roosevelt Garden and Memorial were dedicated on 30th May 1945 in the camp.  A memorial service is held there annually in November in remembrance of those who died.

From 1946 until 1962 Blandford Camp was used to train National Servicemen by the Royal Artillery, the Royal Army Service Corps, REME and the Army Catering Corps. The camp was also used as a venue for motor cycle racing until the circuit was judged unsafe.

The Royal Corps of Signals move into Blandford Camp

In 1960 the 30th Signal Regiment moved into the Camp,  followed in 1967 by the School of Signals. The School (now the Royal School of Signals) was responsible for management and technical courses for Royal Signals Officers and Non-commissioned Officers. Formerly located in Catterick, the move south meant students could more readily take part in joint exercises with other Corps in the South of England, moreover it placed its engineering officers closer to centres of research and development.

Under the Government’s ‘Options for Change’ initiatives of the early 1990s the face of Blandford Camp changed considerably. 30th Signal Regiment moved to Bramcote and in 1995 the Royal Signals soldier training moved from Catterick Camp to Blandford and the Headquarters of the Corps moved to from London to Blandford, where it remains to this day

The Royal Signals Memorial was moved from Catterick when the training organisation moved to Blandford Camp in the early 1990s.