On the 10th August 1920 The Treaty of Sèvres was signed

The treaty was designed to dismantle the Ottoman Empire and virtually abolished Turkish sovereignty. It was one of a series of treaties that the Central Powers signed with the Allied Powers after their defeat in World War One.

The Sèvres treaty marked the beginning of the partitioning of the Ottoman Empire and its eventual demise. The terms it stipulated included the renunciation of most of the territory not inhabited by Turkish people and its cession to the Allied administration. The ceding of Eastern Mediterranean lands saw the introduction of the British Mandate for Palestine and Iraq and the French Mandate for Syria and the Lebanon.

The terms of the treaty stirred hostility and Turkish nationalism. The signatories of the treaty were stripped of their citizenship by the Grand National Assembly led by Mustafa Kemal Atatürk, and this ignited the Turkish War of Independence. In that war, Atatürk led the Turkish nationalists to defeat the combined armies of the signatories of the Treaty of Sèvres. The subsequent Treaty of Lausanne in 1923 saw the establishment of the secular Republic of Turkey.

Much of the chaos and conflict in the Middle East that followed during the 20th Century and into the 21st can in be attributed to the terms imposed by the Treaty of Sèvres in 1920. 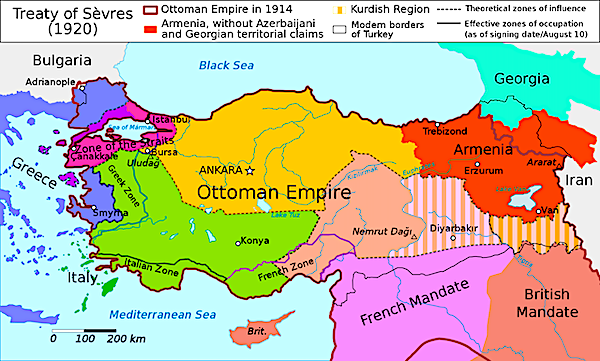