Signalman Kenneth Smith was awarded a posthumous George Cross for his self-sacrificing gallantry while serving with a Long Range Desert Group patrol (LRDG) on the island of Ist in the Adriatic Sea on 10 January 1945.

As the war entered its final year the LRDG were scattered among the Dalmatian Islands, observing enemy troop and shipping movements from well-situated vantage points. One such patrol was situated on Ist, a sparsely populated island just 3¾ miles square that lay 20 miles west of the city of Zadar on the Croatian coast.

Codenamed Kickshaw, the 14-man patrol drawn from both Y1 and Y2 Patrols was commanded by Sergeant Anthony ‘Tich’ Cave. On the evening of 10 January, most of the patrol was in their billet playing cards. It was 2115 hours and Cave was about to turn in for the night. Suddenly he heard four shots. Cave went outside, but saw no lights in the sea, nor did he notice anything untoward neither in the village nor from the radio room where he knew Ken Smith, the signaller and Jock Watson would be. He returned to the billet and went upstairs to bed.

Corporal Gilbert Jetley, who was sick in bed with a fever, pieced together subsequent events from the testimony of his comrades.

‘Something disturbed Watson and he went to the front door. As he opened it, he heard something clank behind it. He saw that it was a large time bomb, which was ticking. There was a booster of extra explosive alongside in a canister.

Watson dashed across to the billet and knocked on the door of Tich Cave’s room. In a voice that was calm but edged with excitement, Watson informed Cave upon entering that there was a bomb outside the radio room. Cave at first treated the matter as a jest. Who would leave a bomb outside the radio room? Watson insisted it wasn’t a joke. Cave, noticing the concern in his face, instructed Watson to return to the house and tell Smith to evacuate the radio room. The pair of them gathered up the radio and hurried outside.

At some point Kenneth Smith must have remembered the family who were asleep in the back-room [of the billet]. He put down the [radio] equipment, picked up the bomb and made for a piece of waste ground between the house and the village church. Before he could get there, there was a tremendous explosion.

Kenneth Smith‘s valiant deed was not the thoughtless action of the ignorant. The whole patrol knew these time bombs and knew that, in addition to being unreliable if touched, many contained mechanisms to explode them immediately if moved. He was therefore a most gallant soldier who gave his life for his comrades and allies.’

The bomb had been planted by members of the Ustaše, a pro German Croatian partisan group. The shots cave had heard earlier were a pro British partisan group shooting at the Ustaše after they had planted the bomb and withdrew. Smith was literally blown to pieces by the power of the bomb, and though one other LRDG man received 37 shrapnel wounds, none of the villagers asleep in the house were hurt.

Smith’s action in removing the bomb earned him a posthumous George Cross, which was presented to his mother by King George VI in 1946. Outside Buckingham Palace she told reporters:

It was just typical of him to do what he did … he was a grand boy and never caused me any trouble. He always wanted to go into the army from a boy, and joined up at the age 18 for 12 years’ service. He was never happier than when he could get his dad to talk about his experiences in the Great War but his dad said: ‘My boy, when you have been through what I have you won’t be so keen’. But he went all the same

Ken Smith was born on 7 December 1920, the son of a Lincolnshire farmer. Having just turned 18 years old, he enlisted on 23 January 1939 and joined the Royal Corps of Signals.

He was initially posted to 4th Divisional Signals but moved on to 50th (Northumbrian) Divisional Signals in October 1939 just after the outbreak of war. The 50th (Northumbrian) Division reinforced the British Expeditionary Force in France in January 1940 and saw action around Arras during the initial German Blitzkrieg. Smith and the remaining division were evacuated from Dunkirk on 2nd June 1940. The Division spent the remainder of 1940 and early 1941 re equipping and re training before being posted to the Middle-East in April 1941.

Smith served in Cyprus, Palestine and Iraq before being posted to Egypt in February 1942. The Division took part in operations at Gazala, Mersa Metruh and El Alamein. In November 1943, Smith volunteered for the Long Range Desert Group (LRDG) Signals and after re training, including parachute training, was eventually posted to Bari, Italy in March 1944. Assigned in August 1944 to Y.2 Patrol he took part in operations on the Adriatic island of Vis and near Mostar in the fascist Independent State of Croatia. 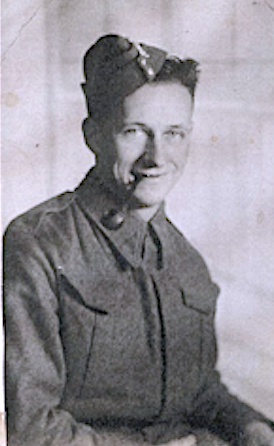 Below Signalman Ken Smith’s medals on display at the Royal Signals Museum, Blandford, 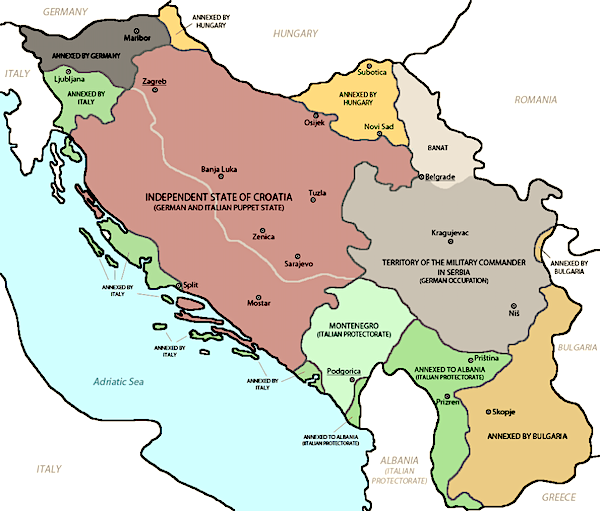 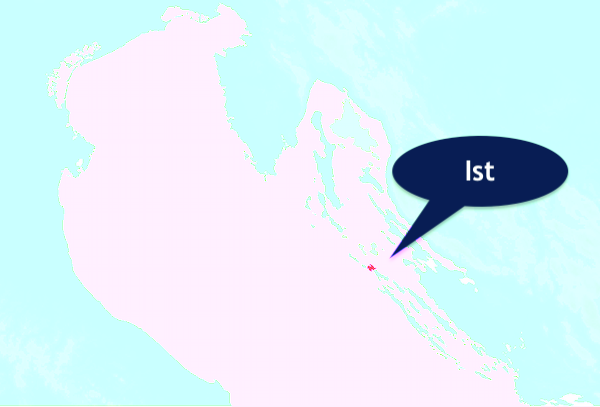 Maps showing the occupation and partition of Yugoslavia 1941 and the location of  Ist – a small island off the Dalmatian coast of Croatia.

Buried or commemorated at

The following details are given in the London Gazette of 19th October, 1945: “The King has been graciously pleased to approve the posthumous award of the George Cross, in recognition of most conspicuous gallantry in carrying out hazardous work in a very brave manner to No. 2328696 Signalman Kenneth Smith, Royal Corps of Signals.” Signalman Smith was based on the Adriatic Island of Ist, at a time when sabotage was a daily occurance. He found a time-bomb at his detachment”s billet, which was shared with civilians and their children. He realised it was ticking and could explode at any moment, he removed it as far away as possible but it exploded before he could make his own escape, he was the only casualty of the blast and undoubtably saved many lives. 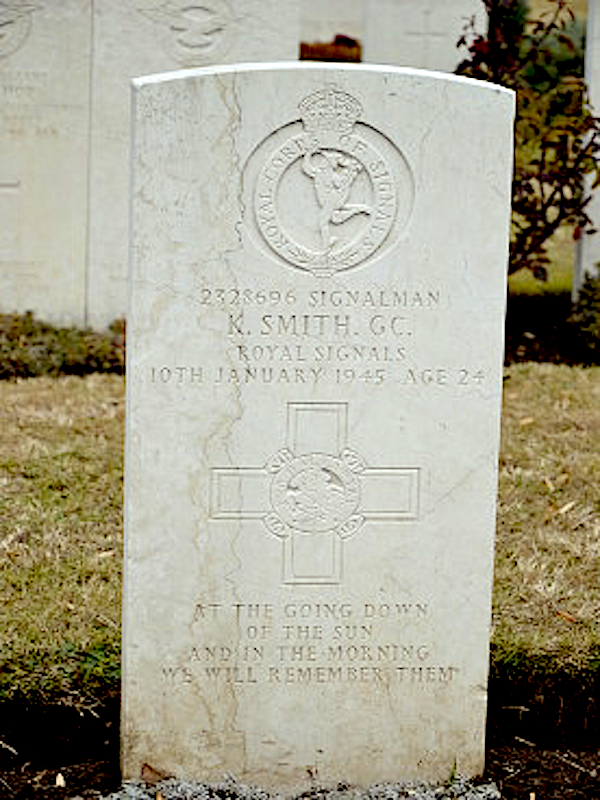 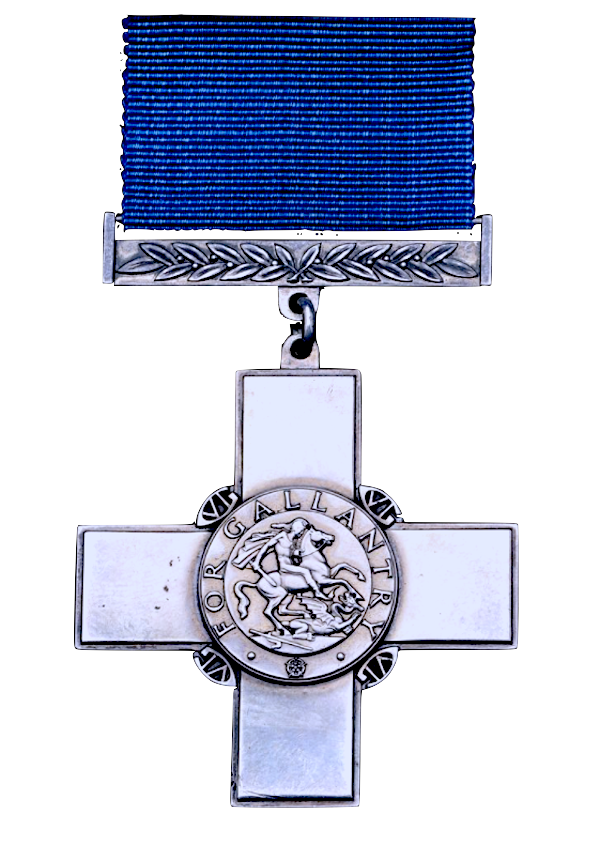