The earthquake struck near Port-au-Prince, the capital of Haiti. It was estimated that 3.5 million people were affected, with between 220,000 and 300,000 killed.

Within 24 hours the Joint Force HQ (JFHQ) at Northwood deployed a 16-person Operational Liaison and Reconnaissance Team (OLRT) commanded by Lt Col Craig Sutherland and including four signallers. It was fully self-sufficient, taking a Land Rover, a large generator, food, water, fuel, tents and office equipment. The mission was to establish a liaison and reconnaissance capability to inform decisions in the UK.

The OLRT helped the Department of International Development (the lead government agency) to ensure that the Royal Fleet Auxiliary ship Largs Bay was loaded with the correct humanitarian supplies and assets and to scope any further military involvement in Haiti.

On Monday 18th January after the aftermath of the earthquake Alpha Troop was told they would be required to deploy with JFHQ. At the time it was uncertain what was needed and who would go.

The four hour notice to move detachment comprising of Lance Corporal Coleman and Signaller Myzak and early entry HQ were finally given the word to go. It was decided that two more of the squadron would deploy. These were Corporal ‘Tina’ Turner and Signaller Beck – both soldiers told just five hrs before transport left for the airhead.

The air route was a tough one, stopping for a night in Canada as the plane could not take off due to snow, followed by another night in Tampa because of issues getting a window to land on Haiti. On arrival at 2330 hours, the group worked through the night to set up HQ. By daybreak they had established a satisfactory working routine. The Squadrons main duties were maintaining the HQs communication systems, power, and VTC back to the UK as well as general duties such as driving, force protection and helping with site management and hygiene. 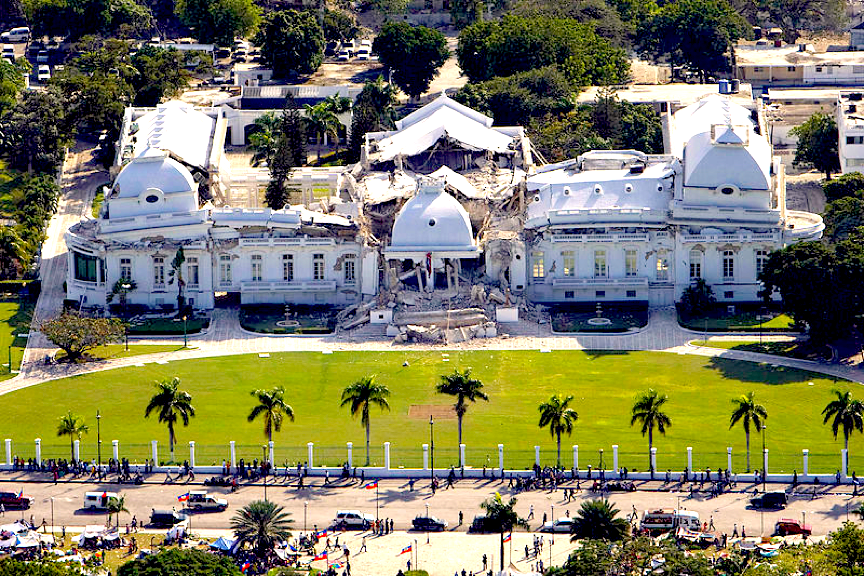 RFA Largs Bay (L3006) was a Bay class landing ship that served with the Royal Fleet auxiliary from 2006 – 2011 before being transferred to the Royal Australian Navy (re named HMAS Choules). The vessel was built by Swan Hunter, Tyne and Wear and initially assigned to patrol the Falkland Islands in 2008.

RFA Largs Bay sailed from the UK on the 3rd February 2010 arriving in Haiti off Port au Prince on the evening of 18th of February 2010.

Operational Liaison Reconnaissance Teams (OLRTs) could be deployed anywhere. They usually comprised two signallers from 30th Signal Regiment working in conjunction with staff officers from relevant departments. Soldiers were ready to deploy within 45 minutes of getting a call and could expect to be moving internationally within a matter of hours.

The teams were used to provide a secure network from locations around the world back to the UK using rugged and portable equipment. Examples of deployments include Egypt and Libya during the Arab Spring and the British Virgin Islands following Hurricane Irma. Teams often worked in secure locations such as embassies but could work outside of these areas on foot or by vehicle. This required soldiers to work in civilian clothing and to be trained in additional specialist skills such as survival, evasion, resistance and escape, advanced driving and covert movement.