On this day in 1743 Thomas Jefferson was born at the family home in Shadwell in the Colony of Virginia. The third of ten children and of British descent he was born a British subject.

Jefferson was the primary draftsman of the Declaration of Independence of the United States, the nation’s first Secretary of State (1789–94 under President George Washington), its second Vice President (1797–1801 under President John Adams) and the third President (1801–09). He was also responsible for the Louisiana Purchase.

In 1795 Jefferson invented a cipher system that was known as the Jefferson Wheel Cipher. It comprised 36 individually numbered wooden discs, each with a different combination of letters on its circumference. The discs would be threaded onto an axle in an order determined by a key known by the sender and the receiver. A message would be formed on the wheel and then encoded by rotating the discs by a set number of letters. A development of this system was used by the US Army from 1922 until 1945. 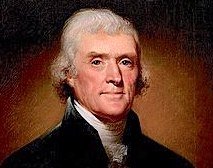