Edwards was born in Wales in 1918 and died in August 2006 aged 88. He served with the Royal Corps of Signals during the Second World War and was a Sergeant by the time he went into captivity at the surrender of Singapore in February 1942.

He spent some time in the notorious Changi jail before being moved to Taiwan where he was a Prisoner of War (POW) for three years, most of it spent in forced labour in a copper mine in Kinkaseki. He worked there as part of a team, digging upwards into a copper seam in sulphur-polluted water and in constant danger of cave-in. Even by the grim standards of Japanese POW camps, Kinkaseki was extreme: 526 Allied soldiers were held there, of whom only 64 survived to be liberated.

As with other Far East Prisoners of War (FEPOW’s), he had found on his return to Britain that there was an active discouragement from reminiscing about the horrors of his period in captivity. The San Francisco Peace Treaty of 1951 ordered Japan to pay a derisory £76 compensation to all surviving FEPOWs, in return for which all future individual claims were waived.

A move to Hong-Kong

In 1963 Edwards went to live in Hong Kong in and remained there for the rest of his life. He worked first for the Hong Kong Government as a housing officer at a time of mass immigration from China, then as a senior housing manager for Hong Kong Land. At the same time he tried to locate the whereabouts of the remains of missing relatives for families in Britain and the Commonwealth including, at the request of Diana, Princess of Wales, the grave of Major General Merton Beckwith-Smith, the father of her lady-in-waiting.

In 1991, after constant campaigning, Jack won a monthly pension from the Government of HK$315 (less than £30) for Chinese veterans, and their widows, who had helped the British in the hopeless defence of Hong Kong in 1941. He also achieved for them the grant of British Citizenship on the handover of sovereignty to China in 1997. Jack Edwards also spoke out for those in Hong Kong who had been forced to sell their property and businesses to the Japanese during the occupation in exchange for the worthless Japanese military yen and he helped former “comfort women” in their quest to force Tokyo to admit that enforced prostitution was a policy, not a side-effect, of its war in South-East Asia.

Desire for apology from the Japanese Government

Edwards returned again to Kinkaseki in 2000 for the erection of a memorial. By this time only ten veterans survived, their journey facilitated by a grant of £10,000 from the British Government. Their chief desire was still an apology from the Japanese Government. Edwards was Chairman of the Royal British Legion’s Hong Kong and China branch, and never missed the annual Remembrance Day services. On such occasions from his flat he flew the very flag that had been hoisted from The Peak by escaping POW’s just days before the Japanese capitulation and before the arrival of the British fleet to restore British rule over the territory.

If his funeral service at St Johns Cathedral in Victoria was anything to go by, Edwards was certainly a much loved and respected figure in Hong Kong. The celebrated flag was draped over the coffin at his funeral. Edwards was appointed MBE in 1985 for services to ex-prisoners of war in Hong Kong and advanced to OBE in 1997 for community work with former servicemen and women in Hong Kong. 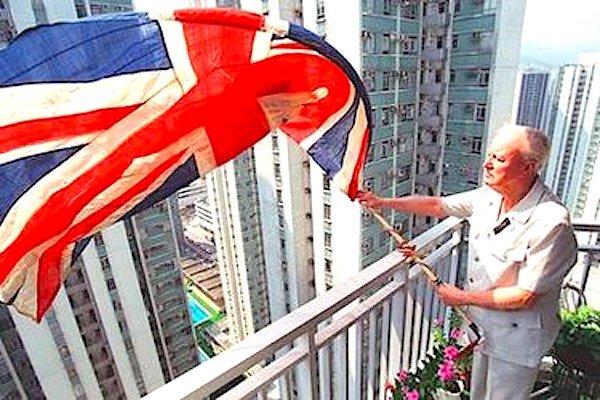