Messages were transmitted through the submarine cable from Calais to Dover, the narrowest point in the English Channel, from which they were passed to the South Eastern Railway for telegraphing to its London Bridge Station and then by messenger to the telegraph company’s office.

By 1840 a telegraph line connected London to Dover and another connected Calais to Paris, yet there was no direct connection between the two cities. This spurred a number of people to propose a submarine cable across the channel.

Initially, the telegraph had been limited to overland use as a suitable material to keep the cable waterproof remained elusive. Although rubber worked as an insulator for brief periods and short distances, it deteriorated with longer exposure to water. It was not until scientist Michael Faraday discovered that gutta-percha did not suffer from this drawback did a sub marine cable became possible.

In 1850 telegraphic engineer John Watkins Brett and his brother Jacob Brett laid the first underwater telegraph cable between England and France. After a French fisherman cut the cable, in September 1851, the brothers installed an armoured cable that lasted for many years. The design and construction of this cable established principles and methods which persisted for over a hundred years. Their Submarine Telegraph Company became operational on November 13, 1851 from London through Dover and Calais to Paris.

Britain was finally connected to the continent. 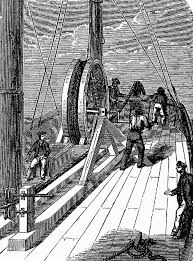