On the 13th October 1868 Thomas Edison executed his first patent

His first patent, for a device to record votes in Congress, was to be the first of 1093 US patents.

Edison was born in Ohio in 1847 to a Canadian father and American mother. From a young age he demonstrated strong inventive and entrepreneurial traits. At the age of 12 he worked selling sweets and newspapers on the railways where he also conducted chemical experiments in a baggage-car.

Edison trained as a telegraph operator and spent four years travelling around the US Midwest as an itinerant telegrapher, teaching himself about electrical and telegraph technology.

In 1872 he patented an electric typewriter that was a prototype of the teletype machines later used by press agencies.
In 1874 he developed the quadruplex telegraph, which sent two messages simultaneously in each direction on one wire.
In 1876 he pioneered the modern industrial laboratory with a research facility in Menlo Park.

At Menlo Park Edison and his team developed the phonograph, the carbon microphone, a system of incandescent electric lighting and an electric tramway. Edison also built the world’s first ever power station in London in 1882, developed the motion picture camera, the nickel-alkaline electric battery, a dictaphone, a mimeograph (duplicator) and made improvements to cement.

In 1892 General Electric was born out of a merger between Thomas Edison’s Edison Electric Company and two other electrical companies. 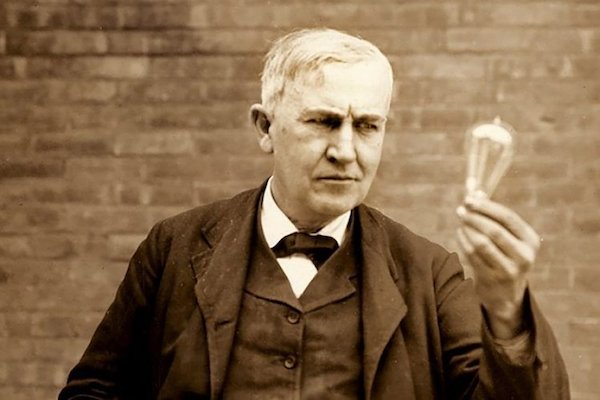