On 13th September 1943 Lieutenant JY Ferguson escaped from Campo 29 in Italy and went on to rescue a group of very senior officers.

Lieutenant JY Ferguson, 5th Indian Divisional Signals, was attached to 3rd Field Regiment, Royal Artillery when he was captured in July 1942 during the first Battle of El Alamein. Transported to Italy he was held in several camps before the Armistice in September 1943, by which time he was in Campo 29 at Piacenza. After hiding in the roof of a barracks with several others as the camp was cleared of prisoners, in the early hours of 13 September Ferguson and two other officers escaped over the camp wall. Ferguson and Captain AP Spooner (Brigade of Gurkhas) continued south to a monastery at Fonte Avellana near Cagli.

While at Fonte Aveilana they heard of a party of British general officers hiding in another monastery in the region. On 10 October, helped by Senior Ruggero Cagnazzo, Ferguson travelled to the coastal town of Pesaro. For four days they worked to procure a boat. Finally, on 16 October, with help from the local resistance movement they were able to persuade a fisherman to help and so sailed from Cattolica, onboard the Freccia Azzurr, to the Allied-occupied coastal town of Vieste. After his arrival in Allied hands, Ferguson immediately requested permission to go back to bring out Spooner and the others with him, the general officers, and any other prisoners that they could find. Initially refused, subsequently a plan was formulated by ‘A’ Force MI-9, and Ferguson and Cagnazzo were landed by boat at Cattolica on the night of 23 October 1943.

There were in fact many more senior officers in hiding in the region than Ferguson had heard about. Amongst them were the general officers that would feature in the escape plan—Lieutenant General P. Neame VC, CB, DSO (formerly General Officer Commanding Cyrenaica Command) and Lieutenant General Sir Richard O’Connor KCB, DSO, MC (formerly General Officer Commanding-in-Chief British Troops in Egypt) who had been captured together during the offensive by the Afrikakorps in Libya on 6 April 1941. Also in their group was Air Marshall O. T. Boyd CB, OBE, MC, AFC, who had been captured when the aircraft in which he was travelling was forced down in Sicily.

Over the next few weeks strenuous efforts were made by Ferguson, Cagnazzo and an Italian officer Lieutenant Vailati and after several frustrations, and some close calls with German troops in the region, the party was finally put aboard a small boat at Cattlolica on 18 December. The escapers comprised the three general officers, Lieutenant Ferguson and Captain Spooner, Signor Cagnazzo and his Jewish wife who had been forced to flee persecution, Lieutenant Vailati, a Camaldolese monk Don Leoni, who had played a large part in the escape efforts of escapees around the monasteries in the Apennines and was now under suspicion, and a South African soldier, MacMullen. On 20 December the boat came to shore north of Termoli and by Christmas Day the senior officers were in the United Kingdom.

For their exploits Lieutenant Ferguson was awarded the Military Cross and Captain Spooner was made an MBE. Cagnazzo was subsequently commissioned onto the General List and returned to occupied territory in March 1944 to effect the escape of the other senior officers. After numerous setbacks, he was successful and five brigadiers, five other officers, nine other ranks and several ‘A’ Force personnel were successfully brought to a port in Allied territory on 10 May.

Both Lieutenant Ferguson and Captain Spooner joined MI-9 and were sent to work with ‘E’ Group in the Far East. From August 1944 Ferguson was involved in a series of operations behind enemy lines gathering information and ‘laying dumps for Allied pilots and organising escape routes’.

In June 1945 Ferguson parachuted into the Moulmein area with a W/T operator and organised the escape of several prisoners of war, during the course of which he was wounded when being pursued by a Japanese patrol. Most notably, when Japan surrendered he was ordered to proceed from camp to camp down the route of the Thai-Burma railway to order that steps be taken by the Japanese to improve the conditions for prisoners and labourers.

Lt Ferguson was the first person to travel the length of the railway after the surrender. Recommended for a Bar to his Military Cross, he was instead made an MBE for his ‘highest possible courage’ and ‘considerable powers of endurance’. 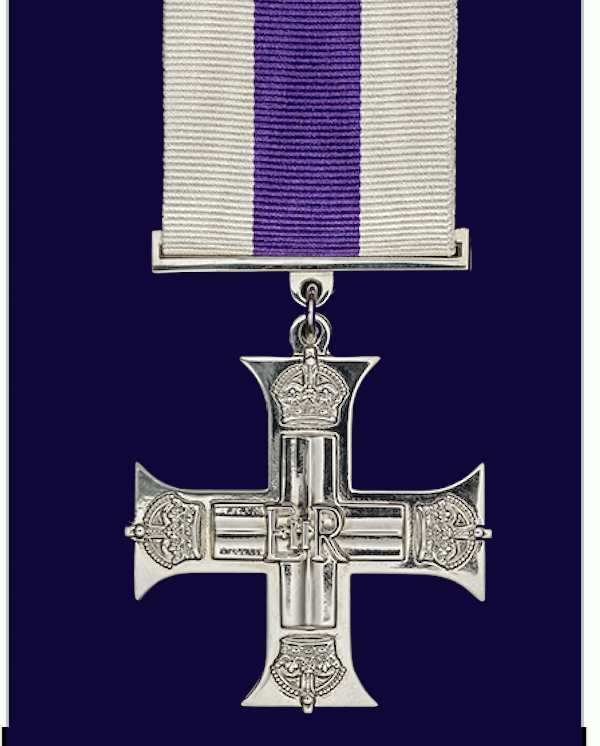 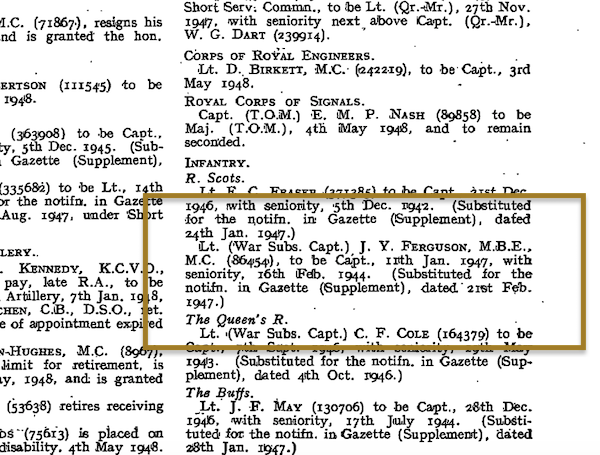