The laser light beam was demonstrated during the CBS program I’ve Got a Secret using a signal from a studio camera to modulate a laser beam that travelled two feet to a receiver that decoded the signal from the beam. That signal was relayed via the control room for the national broadcast. This communication system was the work of GTE scientists Samuel M Stone and Louis Richard Bloom.

Laser light beams are now routinely used to transmit signals along optical fibres. As the use of data increased along with the demand for more bandwidth, the Royal Corps of Signals made use of the considerably greater capacity of fibre optic cables. The cables comprised a core of glass threads, each coated in a reflective material, protected by a polyurethane sheath. Each thread was thinner than a human hair but stronger than steel. The light was channelled by the reflective walls down the threads to the receiver, where it was converted back to an electrical signal.

The increasing requirement for fixed communications systems within British military airfields, operating bases and barracks led to an important changes in the 1970s. The TeleMechs and then the Installation Technicians took responsibility for the more static environments: maintaining and repairing the Army’s fixed telephone systems and fibre optic networks. The Linemen then looked after the more mobile environments, installing and testing different types of field communication cables and telephones. 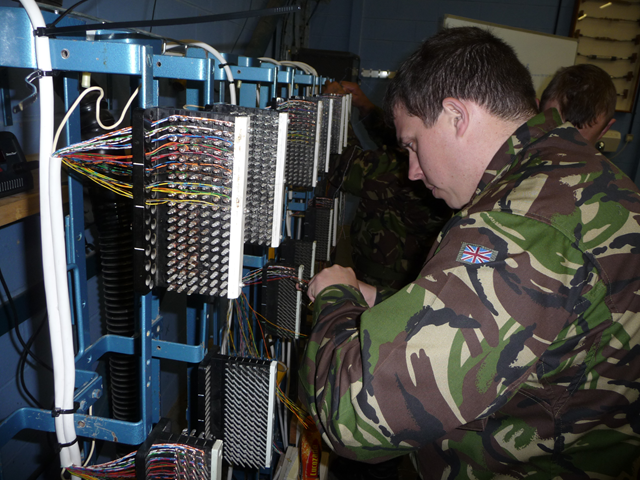