On the 16th August 1960 Cyprus attained independence from the UK

Cyprus had a total population of 573,566; approximately 77% were Greeks and 18% Turkish. The UK were to retain the two Sovereign Base Areas of Akrotiri and Dhekelia, while government posts and public offices were allocated by ethnic quotas, giving the minority Turkish Cypriots a permanent veto.

Leased to the British Empire

In the aftermath of the Russo-Turkish War (1877–1878) Cyprus was leased to the British Empire who took over its administration in 1878. In terms of sovereignty, Cyprus remained part of the Ottoman Empire until 1914, this was in exchange for guarantees that Britain would use the island as a base to protect the Ottoman Empire against possible Russian aggression.

The island would serve Britain as a key military base for its colonial routes. By 1906, when the Famagusta harbour was completed, Cyprus was a strategic naval outpost overlooking the Suez Canal. This was the crucial main route to India which, at the time, was Britain’s most important overseas possession.

Following the outbreak of the First World War and the decision of the Ottoman Empire to join the war on the side of the Central Power, Britain formally annexed Cyprus.

In 1915, Britain offered Cyprus to Greece on condition that Greece join the war on the side of the British. The offer was declined and in 1923 the recently formed Turkish republic relinquished any claim to Cyprus. In 1925 Cyprus was declared a British crown colony.

Following nationalist violence and unrest in the 1950s, Cyprus was granted independence in 1960.

A crisis in 1963–64 brought further violence between Greek Cypriots and Turkish Cypriots, which displaced more than 25,000 Turkish Cypriots into enclaves and brought the end of Turkish Cypriot representation in the republic. In July 1974, a coup d’état was staged by Greek Cypriot nationalists and elements of the Greek military junta in an attempt to incorporate Cyprus into Greece. This action precipitated the Turkish invasion of Cyprus which led to the capture of the present-day territory of Northern Cyprus in the following month. A separate Turkish Cypriot state in the north was established by unilateral declaration in 1983; the move was widely condemned by the international community, with Turkey alone recognising the new state. These events and the resulting political situation are matters of a continuing dispute to this day. 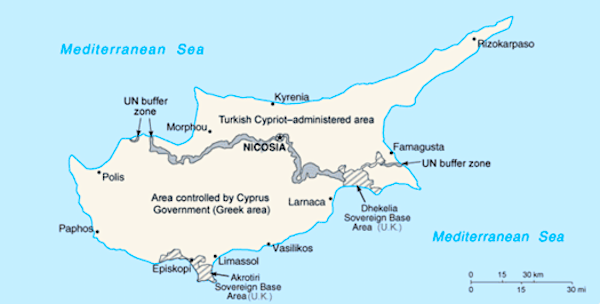