On this day in 2000 in Bosnia Myra came into service. Myra was an off the shelf area communications and information system designed to replace Euromux which was to be returned to the UK.

By 1999 a substantial amount of Euromux and Ptarmigan had been deployed in a static role in Bosnia and Kosovo respectively and for some time this had caused significant overstretch on Corps manpower and equipment capability and reduced its flexibility to deploy on new operations. Both 36th and 40th Signal Regiments had been attempting to carry on as normal but had been deprived of between 60% and 70% of their equipment. A decision was taken in 1999 to replace both Euromux and Ptarmigan with a Commercial Off the Shelf Communications and Information Systems (CIS) solution. A contract was awarded to BAE Systems in February 2000 with in-country commissioning to be completed by November 2000.

In Bosnia a satellite-based solution was called for and the key features of the equipment were to be that it should be modern, off the shelf, should operate unmanned and could be remotely controlled and monitored from a central network control centre. The NET Promina multiplexer was chosen as the backbone of the communications network, providing voice compression on satellite links, serial and IP data. Telephone services were provided by Siemens Hicom PABXs. Network control centres were established in theatre and in the UK. All equipment was installed in 20ft International Standards Organisation (ISO) transportable containers that were equipped with air conditioning, uninterruptible power supplies and remote alarm systems. They were designed to be operated unmanned.

Responsibility for programme implementation was given to Commander 11th Signal Brigade, Brig Jonathan Cook, and Capt John Hiorns, who was the in-theatre programme manager. As a result of the successful implementation of Myra the the Multi National Division (South West) Signal Regiment of 350 soldiers was able to reduce to a BRITFOR signal troop of approximately 50. Commercialisation was a watershed for future operations. It also enabled 30th Signal Regiment to end their run of almost 10 years of continuous significant presence in the Balkans. 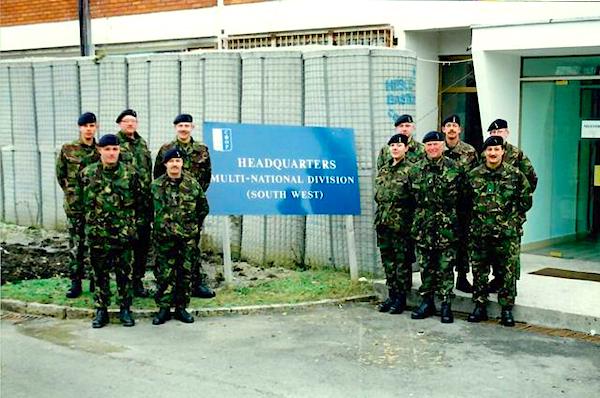