On the 17th December 1778 Humphry Davy was born

Davy was a British chemist best known for his experiments in electro-chemistry and his invention of a miner’s safety lamp.

Humphry Davy was born on 17 December 1778 in Penzance in Cornwall. At 19 he went to Bristol to study science; there he investigated gases. One of his many experiments involved preparing and inhaling nitrous oxide (laughing gas) and in 1800 published the results of his work in ‘Researches, Chemical and Philosophical’. This made his reputation and the following year he was hired as an assistant lecturer in chemistry at the Royal Institution. There he was a great success, with his lectures soon becoming a draw for fashionable London society. He became a fellow of the Royal Society in 1803 and was awarded its Copley Medal in 1805.

In 1800, the Italian scientist Alessandro Volta had created the Voltaic Pile. This was a pile of zinc and copper discs each separated by moist pasteboard discs that when connected to wires produced a flow of electric charge (a current). It was the first electric cell or battery. As one of the first, Davy pioneered the use of electric current from the voltaic column for his chemical experiments, what is now called electrolysis and was able to isolate a series of substances for the first time. In 1807 he isolated potassium and sodium, then calcium, strontium, barium and magnesium the following year. He also studied the forces involved in these separations, inventing the new field of electro chemistry.

Even at that early stage, the fact that a configuration of two metals and a fluid could generate a continuous stream of electricity struck Davy as highly remarkable. He suspected that some day the battery would profoundly transform chemical understanding. Later Davy successfully used the battery in exploring chemical nature.

In 1812 Davy, now considered one of Britain’s leading scientists, was knighted. The following year he set off on a two year trip to Europe visiting Paris (even though Britain and France were at war) where he collected a medal awarded to him by Napoleon. He also identified the element iodine for the first time.

In 1815, he received a letter from some Newcastle miners which told of the dangers they faced from methane gas. The gas often filled the mines, and could be sparked off by the candles they had in their helmets to light their work. The resulting fires and explosions caused many deaths. Davy developed a method of separating the flame from the gas and his ‘Davy’ lamp later became widely used.

Davy was made a baronet in 1818 and from 1820 – 1827 was president of the Royal Society. He died on 29 May 1829 in Switzerland. His assistant, Michael Faraday, went on to establish an even more prestigious reputation than himself. 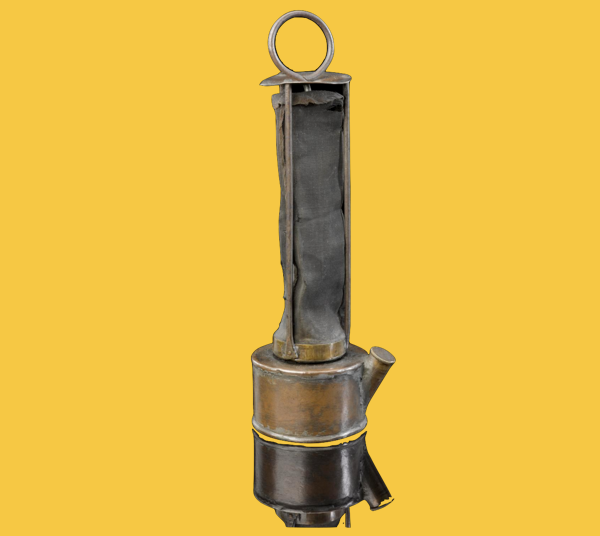