In 1952, The United States detonated the world’s first hydrogen bomb, on Eniwetok atoll in the Pacific. ‘Ivy Mike’ was the codename given to the first full-scale test of the thermonuclear device which was carried out on 1 November 1952 at 07:15 local time.

It produced a yield of 10.4 megatons of TNT. The fireball created by the explosion had a maximum radius of 2 miles. The mushroom cloud rose to an altitude of 135,000 ft. The blast created a crater 6,230 ft. in diameter and 164 ft. deep.

After the Soviet Union successfully test detonated its own atomic bomb in September 1949, the United States responded by launching an accelerated program in 1950 to develop more advanced thermonuclear weapons. This began the Cold War arms race.  Nuclear testing and research became important goals for several countries, especially the United States and the Soviet Union.

The success of the US operation did not stop opponents of the hydrogen bomb casting doubts over its development. J. Robert Oppenheimer, one of the fathers of the atomic bomb argued that little would be accomplished except the speeding up of the arms race, since it was assumed that the Soviets would double their efforts and follow suit. The opponents proved correct in their assumptions. The Soviet Union exploded their own thermonuclear device the following year. 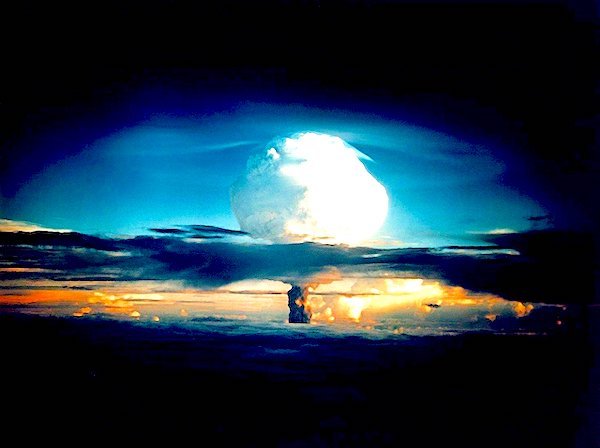