On this day in 1982 the The Irish Republican Army (IRA)detonated two bombs during British military ceremonies in Hyde Park and Regent’s Park, both in central London.

The explosions killed 11 military personnel: four soldiers of the Blues & Royals at Hyde Park, and seven bandsmen of the Royal Green Jackets at Regent’s Park. Seven of the Blues & Royals’ horses also died in the attack. One seriously injured horse, Sefton, survived and was subsequently featured on television programmes and was awarded ‘Horse of the Year’.

In 1987, Gilbert “Danny” McNamee was convicted of making the Hyde Park bomb and jailed for 25 years. He served 12 years before being released under the terms of the Good Friday Agreement; his conviction was later quashed. In 2013, John Downey was charged with four counts of murder in relation to the Hyde Park attack; his trial began in January 2014 but collapsed the following month after a ruling upon a letter sent to him by police assuring him that he would not be prosecuted over the attack. On 18 December 2019 the High Court ruled, in a civil case, that John Downey was an “active participant” in the bombing.

No one has ever been charged in connection with the Regent’s Park bombing. 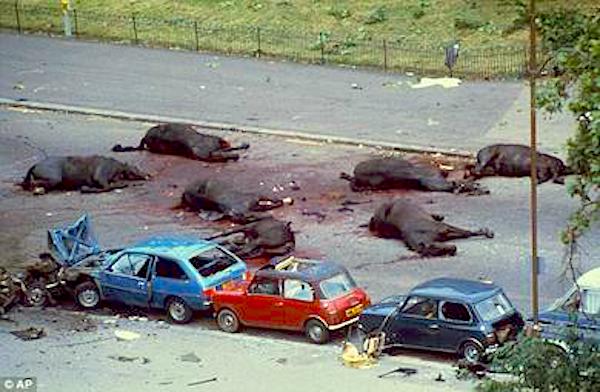