Glancy, 50th (Northumbrian) Divisional Signals, had been captured at Vimy Ridge on 19 May 1940 and held at StalagXX-A at Thorn in Poland. Glancy and a soldier of the Middlesex Regiment, Private JT Hutson, looked after a rabbit farm at the camp headquarters which allowed them to assist in hiding prisoners of war during the early stages of their escape.

In October 1943, the two soldiers escaped with two officers that they had hidden—Captain RT Stewart-MacPherson, The Queen’s Own Cameron Highlanders and a New Zealander, Captain CN.Armstrong MC. Having hidden in the coal-hold of a Swedish ship in Danzig, on 20 October they were put ashore on the Swedish island of Gotland. 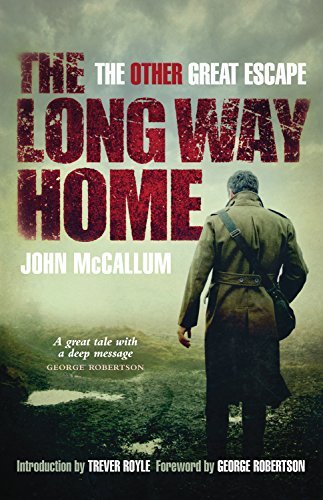 Three other Signalmen to return via Sweden were Signalmen PJ Harkin, J. McCallum, and JB O’Neill, who were all serving with General Headquarters Signals when they were captured in separate incidents during the Battle of France. Their escape in April 1944 took them from a detached work camp in the Sudetenland to the port of Stettin (Szczecin). With the help of a Swedish sailor they were able to stow away in a coal bunker. They were put ashore in Sweden and taken to Stockholm, where they arrived on 29 May. Their story was recounted in detail in a book by McCallum—The Long Way Home.