On the 21st October 1805 the Battle of Trafalgar was fought

This was the last and the most significant of Admiral Nelson’s victories. The British fleet defeated Napoleon’s numerically stronger Franco- Spanish fleet off the coast of Spain and ensured the British control of the sea for the rest of the war and for much of the next 100 years.

Signalling and the Navy

In 1804 a new code was introduced that incorporated a vocabulary of some 2,000 words and 1,000 sentences devised by Captain Sir Home Popham. In this system, three- or four-flag hoists referred to words or phrases in the Signal Book. This type of hoist was preceded by the ‘telegraph flag’ that indicated that a vocabulary message was to be sent. The signal was ended with a finishing flag. Words not in the vocabulary were spelt out individually. The order in which flag hoists were read if there were several on different masts was: main, fore, mizzen, then starboard before port and upper yards before lower.

Shortly before the fleets engaged Nelson decided to send a message showing his trust in his men. The planned message was ‘England confides that ever man will do his duty’ with ‘confides’ being used at the time as ‘trusts’ is done currently. However Lieutenant John Pasco the Signal Office suggested changing ‘confides’ which was not in the vocabulary with ‘trusts’ which was as this. This would avoid spelling out ‘confides’ and save time just before the battle commenced. The message thus was changed, for speed, from one that was clear to one that was ambiguous that could be either a display of trust or an instruction. Nevertheless it has remained one of the most famous of Naval signals. It was then replaced by the signal ‘ Prepare to anchor at the close of the day’ and then by the second famous signal ‘Engage the enemy more closely’. 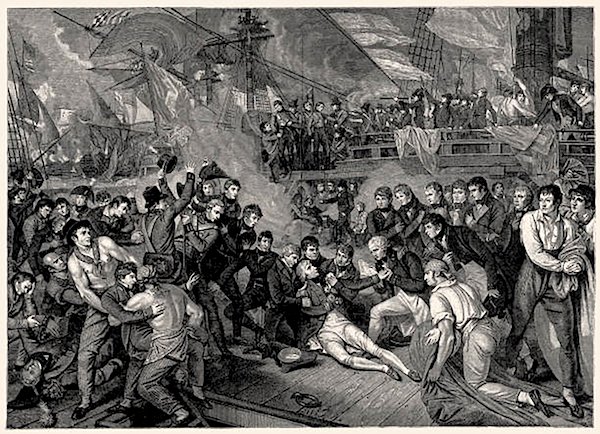