Alan Johnson was a motorcycle dispatch rider (DR) in the North Africa Campaign in the Second World War and in civilian life became a successful artist.

A passionate motorcyclist he bought his first machine aged 17 and enlisted in the Royal Corps of Signals undegoing trining as a signalman at the Signal Training Centre at Prestatyn in North Wales. In November 1940 he was posted to North Africa and spent most of the war in Egypt. Following his promotion to corporal he was posted to 3 General Headquarters Signals and subsequently became a special DR for the 3rd Air Formation Signals.

Sabotage and enemy intelligence activity made it essential that the Army and the Royal Air Force had their own mail systems for important and urgent communications. Johnson was issued with a Norton motorcycle and would travel at speeds of 200-300 miles at a time on desert tracks. There was a constant danger of being strafed by German fighters who would dive on a lone DR from behind and it was impossible to hear them over the noise of the engine. On one occasion he narrowly escaped being killed when, on driving through an air raid, a bomber spotted his headlight and attacked him with its cannons. Another hazard was delivering messages at night where there was always a risk of being shot by a nervous sentry.

After the battle of El Alamein, Churchill and Monty met for a conference at the Mena House Hotel, Cairo. Johnson and his five-man unit became their personal DRs. At the end of the war, Johnson and 26 comrades were ordered to make their way back to England. They left their camp south of Cairo in eight new Willys jeeps and embarked at Alexandria on an American liberty ship which docked at Marseille in April 1945. From there, they went by jeep through recently liberated France and Belgium and then into Germany.

After the war Johnson returned to commercial art and eventually opened his own studio in central Manchester which he ran successfully until he retired. He remained an enthusiastic motorcyclist and travelled all over Europe.

While he was in Egypt, Johnson became a founder member of the Bar-None Motor Cycle Club. He developed an interest in vintage motorbikes and was out with fellow club members after his ninetieth birthday when he suffered a stroke which confined him to a wheelchair until his death. As well as motorcycling he was a keen mountaineer, rock climber and caver. He painted both professionally and as a pastime concentrating on ships and landscapes. Two of his ship paintings were accepted by the Royal Society of Marine Artists for their exhibition in 1965-66. He also painted in the Lake District where he had a second home, and wherever his travels took him. Two of his paintings of Manchester Docks are on display in Salford Art Gallery. An example of his work is shown here. Alan Johnson died shortly before his 100th birthday on 25th February 2020. 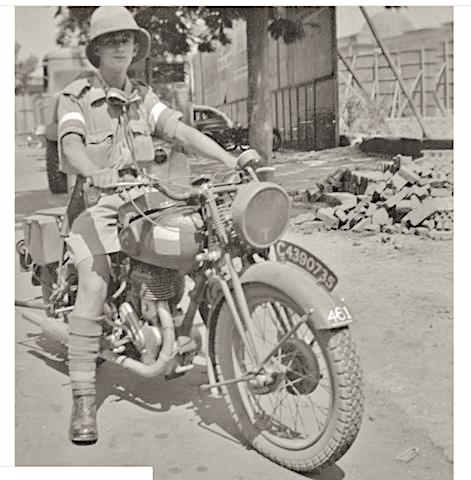 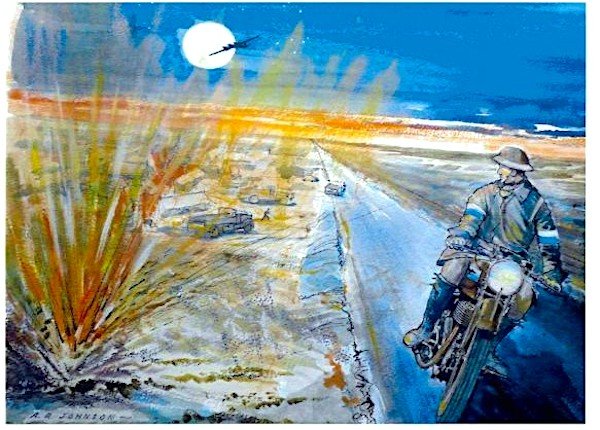