On the 25th July 1959 a hovercraft crossed the English Channel for the first time.

Having first been shipped to France by tender, the world’s first all metal hovercraft, SR N1, crossed the Channel between Calais and Dover in two hours and three minutes. On board were Captain Peter Lamb piloting, John Chaplin as navigator and the inventor (later Sir) Christopher Cockerell who was, in his own words, there to provide ‘moveable ballast’.

The first application of the hovercraft for military use was by the British Armed Forces, using hovercraft built by Saunders-Roe. In 1961, the United Kingdom set up the Inter service Hovercraft Trials Unit based at Royal Naval Air Station (RNAS) Lee-on-Solent (HMS Daedalus) near Portsmouth and now the site of the Hovercraft Museum. This unit carried out trials on the SR N1 from Mark 1 through Mark 5 as well as testing the SR N2, SR N3, SR N5 and SR N6 hovercraft.

A Hovercraft Trials Unit (Far East) was established by the Royal Navy at Singapore in August 1964 with two armed hovercraft which were deployed later that year to Tawau in Malaysian Borneo and operated on waterways there during the Indonesia–Malaysia confrontation.

The hovercraft’s inventor, Sir Christopher Cockerell later claimed that the Falklands War could have been won far more easily had the British military shown more commitment to the hovercraft although earlier trials had been conducted in the Falkland Islands with an SR N6, the hovercraft unit had been disbanded by the time of the 1982 conflict.

In 1970 Corporal Dave Walker was posted to 200 Hovercraft Trials Squadron, Royal Corps of Transport , who were assessing the military capability of SR N6 hovercraft in the Arctic Circle. Walker led the Royal Signals detachment, providing an administration rear link to the UK with a C15 HF set and communications to the hovercraft using an A43 UHF set and an A41 VHF set. An example of how, in addition to its responsibilities in Northern Ireland, Germany and elsewhere, the Royal Corps of Signals continues to support other branches of the Army and the other Services around the world. 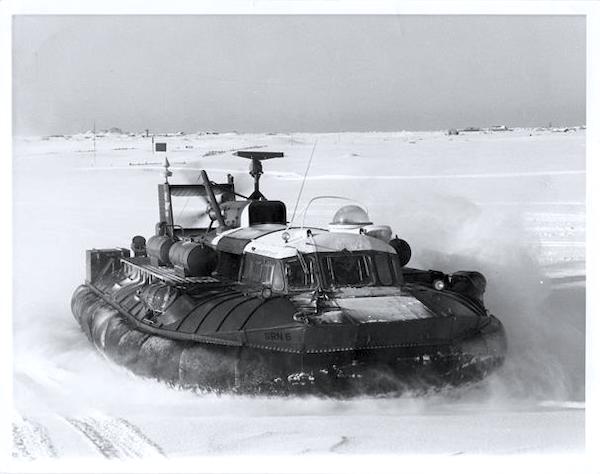