On the 26th October 1998 a Czech helicopter crashed in Bosnia

On the 26 October 1998, it was reported that an incident had occurred with an aircraft from the Czech Brigade. Details were limited with information passed directly over the Divisional Command Net. As with most of voice traffic on the net, the crew monitored the information but were not involved other than to maintain a listening watch.

It transpired that a Czech Mi-17 ‘Hip’ Helicopter had crashed in severe storms and the UK were coordinating the search and rescue efforts with the Czech Brigade. This was being coordinated across the Divisional Radio Rebroadcast (RRB) at Gola Peak making the site a key installation in terms of connecting the UK Divisional HQ with the Czech Brigade. The  (RBB) crew continued to monitor the net as the lights went out and the hill top site descended into complete darkness.

A fault on the primary generator had caused a power outage. The relay switch which connected the two generators had tried to start the secondary but failed so the site was now running on batteries. Normally this would suffice for an extended period but the UK RRB was being utilised extensively to support the search and rescue efforts between the NATO partners.

The Canadian hosts reported our condition to the Brigade HQ in Coralici. Unfortunately  the weather conditions on top of the mountain restricted any airframes bringing up an engineer to fix the generators.

At the mercy of batteries

The British detachment were now at the mercy of four series 100amH batteries. In total darkness and with the working space beginning to freeze as the heating systems had also shutdown the site been advised they’d have to sit it out until the next day when the bulldozer could start work on the road and HLS in daylight.

Royal Signals to the rescue

Signaller Stuart Codack  (a crewman on the fixed Radio Rebroadcast (RRB) site who had deployed to Bosnia in 1998 as part of 1(UK) Armoured Divisional HQ and Signal Regiment)  and his Det Comd (normally employed within an Armoured Squadron) looked over the two 20kW generators under torch light using their limited knowledge of power to try and start one of the generators.

Several unsuccessful attempts were made to start the generators. Thirty minutes in similarities were noticed with the configuration of automotive batteries on the AFV 436 so efforts were made to slave the second from the first but with no success.

The final throw of the dice was to lift the starter battery from the primary and install it on the secondary. Once installed, the secondary generator slowly spluttered and started. The lights flickered and filled the generator room with light to the absolute delight of the two British soldiers. Warmth started to seep into the living quarters and power was being restored to essential services including the Divisional Command RRB.

Sadly the crew of the Czech Helicopter perished in the crash. The rescue efforts had been maximised and coordinated seamlessly between the Czech and British formations. Had the RRB been inoperable for a minute, this may not have been the case.

For their actions, the Detachment Commander received the General Officer Commanding (GOC) Commendation. Sig Codack was awarded a crate of Herforder Pils which was the currency on return to Herford, Germany. 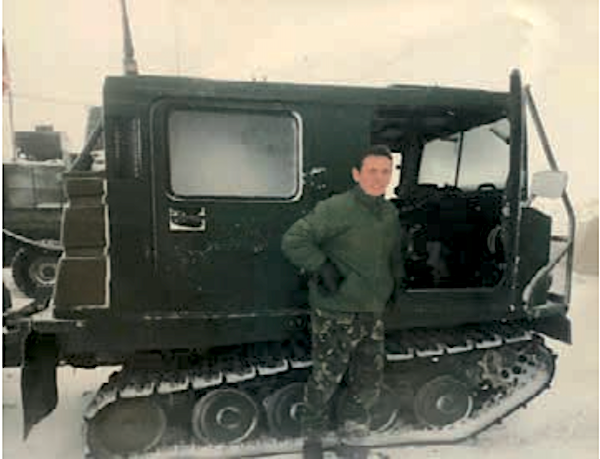 About the op tour and Gola Peak

A winter tour with 1(UK) Armoured Divisional HQ and Signal Regiment with the NATO Stabilisation Force (SFOR) the team enjoyed a couple of weeks of warm weather before the winter began to draw in around the hill top site.  The wind chill, temperatures at Gola Peak could get well below -30.

Every effort was made by the Canadian hosts to sustain the site over the winter with extra resources, equipment maintenance, work on the Helicopter Landing Site (HLS) and extensive work on the road up to the abandoned World War II German Bunker system now occupied by four British and five Canadian soldiers. The site was also uplifted with a snow mobile and Bulldozer to support an escape plan and maintain (where possible) the levels of snow on the HLS and the route to the site.

Two linked 20Kw Caterpillar generators powered the entire site with a relay switch should the primary generator fail providing uninterrupted power supply to all the UK and Canadian CIS/ICS systems inclusive of all lighting and heating for the site.

Part of the routine of the site involved re-fuelling both generators daily with servicing conducted by the Canadian engineer from Coralici helicopter but this was weather dependant. As the harsh weather closed in on the site, the generators became more and more critical as the detachment became dangerously isolated. Keeping  a working power supply was mission critical. On the night of the crash, with an engineer unable to deploy to the site, the efforts of Sig Cradock and his Det Commander proved potentially life-saving.