Derrick Hubert Baynham was born on 13 April 1924 at Walton-on-Thames, Surrey. In 1941 as a teenager he joined the Home Guard and in early 1942 he enlisted into the Royal Signals. Commissioned in May 1943, he served with Guards Armoured Division Signals in North-West Europe. For his gallantry at Nijmegen Bridge during Operation Market Garden he was mentioned in despatches.

He, and another schoolboy, earned their George Medals in an act of extraordinary gallantry in the most tragic of circumstances in the summer of 1941. On the morning of 28 August, a Royal Air Force aircraft suffered an engine failure and crashed into the sea about 500 yards off Rhosneigr, Anglesey. The Polish pilot and two trainee observers managed to get onto the wings of the partially submerged aircraft but, unable to maintain their hold in the heavy sea, the two observers and were washed away and drowned.

Stewart Wood, a 17-year-old schoolboy from Chester, and his friend Derrick Baynham managed to launch a 12-foot wooden dinghy into the heavy sea and set off for the aircraft. It took them 45 minutes and, just as they reached it their dingy capsized. Baynham managed to climb onto the aircraft’s tail but a wave swept him and the pilot into the sea.

For over 30 minutes the two boys fought to right the dingy and cling on but finally all three were swept away and they decided to make for the aircraft again. The pilot was now very weak and both boys were exhausted. Unable to get onto the aircraft, the two boys then swam with the pilot to a beach defence post. The pilot hung on to the post and the two boys struck out for shore. By now the crash had attracted military personnel from nearby bases and local people. Some formed a chain and they managed to save the two exhausted boys, who had spent over two hours in their rescue attempt. Sadly, the pilot was swept away. The other attempts at rescue from the beach ended in tragedy. A whaler had capsized and at least one other rescuer who attempted to swim out was drowned. In total, the crash of the aircraft had cost the lives of its three crew and 11 rescuers.

Both boys were presented with the George Medal at Buckingham Palace on 29 April 1942. They were also awarded the Royal National Lifeboat Institution Silver Medal, a most prestigious decoration; Baynham’s is the only such award to Royal Signals. Several of the other would-be rescuers were also recognised for their courage, some posthumously. 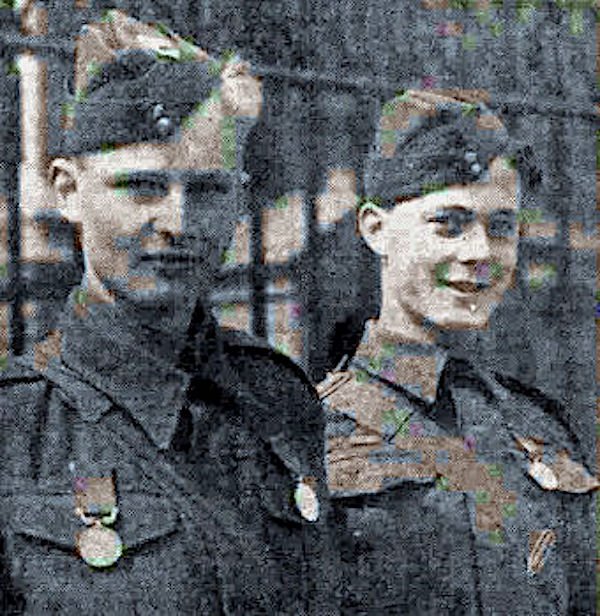 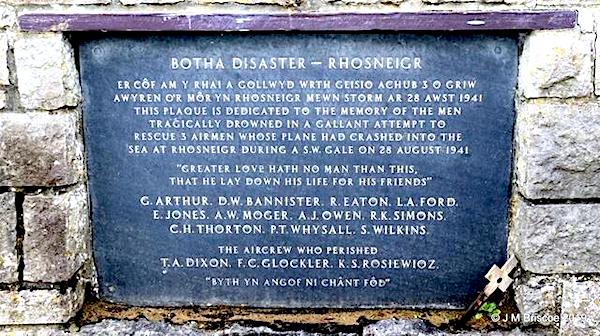 The memorial at Rhosneigr Anglesey to those who died.