On the 28th July 1914 Austria-Hungary declared war on Serbia

On this day in 1914 Austria-Hungary declared war on and started hostilities with Serbia effectively igniting a conflict which ultimately would engulf the whole world. The First World War, or the Great War as it became known at the time, had begun. In 1914 Europe was dominated by six countries: Britain, France, Germany, Austria– Hungary, Russia and Turkey. Germany was allied with Austria–Hungary and France was allied with Russia, while Britain was linked with France. Turkey was leaning towards the Germans.

In 1908 Austria–Hungary had annexed Bosnia and when Archduke Franz Ferdinand was assassinated in Sarajevo in June 1914, the Austro-Hungarians blamed Serbia and this led to war between Germany, Austria–Hungary and Russia on 1st August and then on 3rd August, Germany declared war on France and invaded Belgium. The German intention was to move rapidly through Belgium, encircle Paris and knock France out of the war before Russia could mobilise her forces.

The invasion of Belgium brought Britain into the war. The small British Expeditionary Force (BEF) took up position on the left flank of the French Army and was pushed back in the retreat from Mons. The Germans failed to stick to their plans, lost communication with High Command, outpaced their logistics and then were held and pushed back at the Battle of the Marne. This action probably decided the war. There followed, a ‘Race to the Sea’ as the Germans moved north and sought to capture the Channel ports. The Germans were held by the British, French and Belgians at the first Battle of Ypres (1914) and subsequently a period of three and a half years of trench warfare began. The defensive combination of trenches, machine guns, artillery and wire proved much stronger than any offensive weapon on either side until the invention of the tank. This resulted in a war of attrition on the Western Front, for both sides, with a succession of major battles. These included Verdun (1916), the Somme (1916) and Passchendaele (1917), and numerous other engagements resulting in great numbers of casualties for little return in terms of territorial gain. 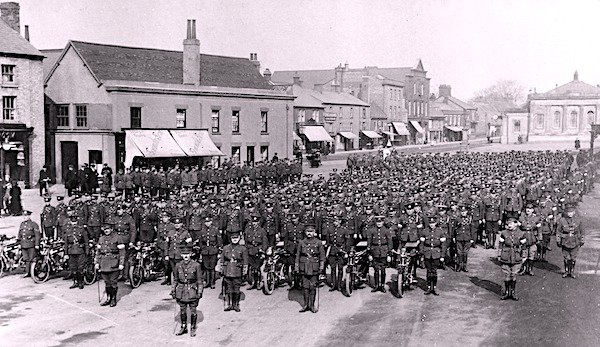