On this day in 2009 in Afghanistan during Operation Mar Lewe (Snake Wolf) in Helmand Province a Brigade Reconnaissance Force (BRF) troop of 19th Light Brigade was patrolling to the southwest of Musa Qala with the Light Electronic Warfare Team (LEWT) in support. The summer of 2009 had been a hard season of fighting in Helmand and Operation Mar Lewe was a three-day International Security Assistance Force operation.  During this time the Taliban were attacked as the Afghan Security Forces and British Army struck at enemy positions around the village of Yatimchay 6 kilometres south of Musa Qaleh.

Signaller Daniel Nash was a member of the LEWT. His priority during a contact was to locate insurgents and warn of their impending actions. At first light a BRF vehicle struck a mine to the rear of Nash’s vehicle and, with scant regard for their own safety, Nash and his LEWT commander dismounted and moved back to assist the stricken vehicle and its crew and attempted unsuccessfully to save the lives of two BRF members, both of whom had suffered multiple injuries. Undaunted, Nash put this experience behind him and returned to his vehicle to set about providing local protection and EW support to the patrol. He intercepted insurgent transmissions, indicating their intent to conduct a follow-up attack, which thanks to Nash’s warning was deterred. During a later patrol Nash was wounded in action but refused evacuation instead continuing to provide EW support, despite receiving grenade fragment injuries to his leg. He was awarded the Royal Signals Institution Princess Mary Medal. 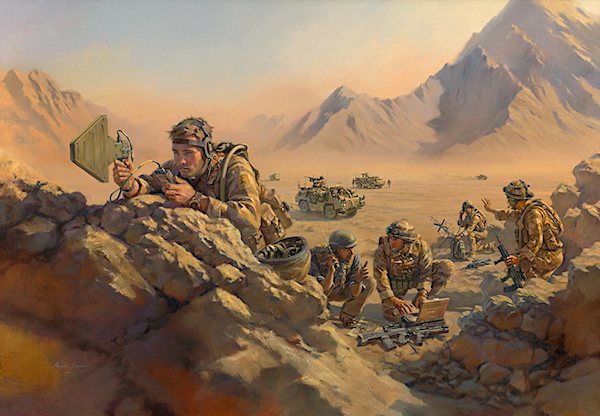 “Task! Task! Task!” by Stuart Brown represents a typical scene from LEWT operations in Afghanistan in 2009.
See all 'On this day' articles