The Anglo-Iraqi War came to an end when an armistice was agreed thus ending four weeks of fighting.

Until 1932, when Iraq became the independent Kingdom of Iraq (often referred to as Mesopotamia) it had been governed by the United Kingdom. Before granting independence, the United Kingdom had signed the Anglo-Iraqi Treaty of 1930 which included permission to establish military bases for British use and provide the facilities for the unrestricted movement of British forces through the country. These conditions were imposed by the British to ensure control of Iraqi petroleum and other British interests but many in Iraq resented these conditions as it implied that Iraq was to remain under the control of the British Government.

By 1937 there were no British troops left in Iraq but the Royal Air Force had been allowed to retain two bases to protect British petroleum interests and which were a link in the air route between Egypt and India.

In March 1941 there was a coup d’etat and a group of senior military commanders seized control of Iraq and formed a National Defence Government. Britain was reluctant to recognise the new government and relations soon deteriorated as it became clear that Iraq intended to refuse to grant any further concessions to Britain and wireless intercepts suggested that Iraq was forming closer ties with Fascist Italy.

In April the Iraqi government went even further and asked Germany for military assistance in the event of war with Britain. A decision was made by the Allies to assemble an invasion force from elsewhere in the Middle East and from India.

During the ensuing war, a force known as Habbaniya Force made up with units from 10th Indian Infantry Division advanced into Iraq. Initially Habforce was to relieve the British garrison forces besieged at the Royal Air Force treaty base at RAF Habbaniya but the threat to Habbaniya was removed by actions of the garrison before any elements of Habforce arrived. From there Habforce and a portion of the Habbaniya garrison advanced through Fallujah to capture Baghdad. By 31 May and in just four weeks an armistice had been signed and the government collapsed. British troops were to remain in Iraq until 1947. 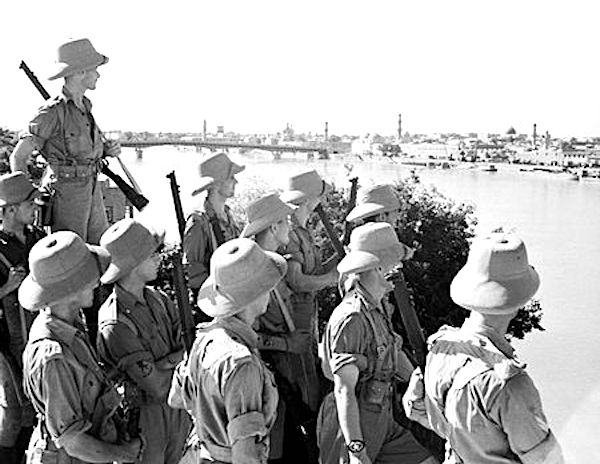