On the 3rd December 1975 signaller presented with medal for rescue

Signalman Stephen Donoughue of 59 Squadron, 33 Signal Regiment (V) was, on the December 3rd 1975, presented with the Liverpool Shipwreck and Humane Society Bronze Marine Medal and Scroll for his part in the rescuing of a drowning man by the Lord Mayor of Liverpool, Councillor Owen Doyle,. He was accompanied at the presentation by the Squadron Commander, Major AP Grove TD Royal Signals (V). Stephen had been a member of the T & AVR for just over 12 months and attended the last of the Regimentally organised recruit courses at The Dale in Chester.

Whilst working on the Pier Head in Liverpool, Donoughue saw a man climb over the guard rail at the river edge and Jump straight into the Mersey. Although Stephen had not had any lifesaving training since he was 12, he had no hesitation in jumping in after him despite a drop of some 20 feet into the oily river below.

The man threatened to pull Donoughe under with him should he try to rescue him and after a brief struggle in the river, a rescue was made. Donoughue spent some time in hospital afterwards for his pains after drinking some of the polluted Mersey.

It transpired that this was not the first time he had rescued someone from drowning, having saved a child when he was 13 years old. 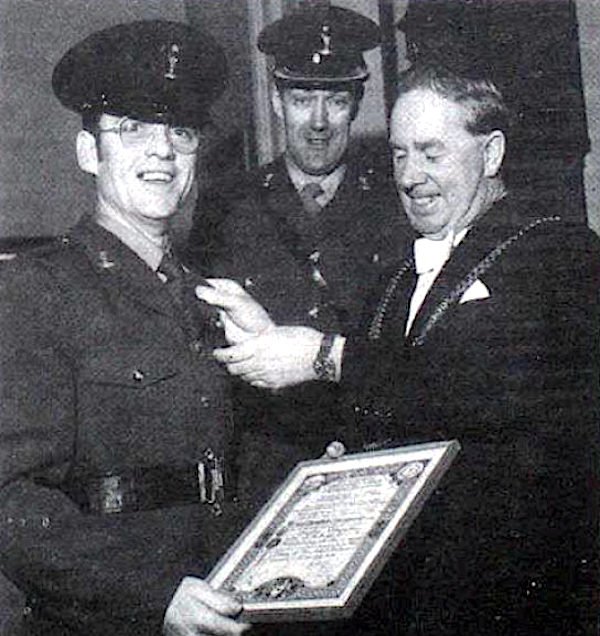