On this day in In 1879, the Telephone Company Ltd opened the first public British telephone exchange in Lombard Street, London using Edison’s system. The service was in effect an exclusive club, to which members paid a subscription – hence the origin of the term ‘subscriber.’

The exchange served just eight subscribers with a two-panel Williams switchboard. Between the connected offices, private conversations could be made. By the end of the year, with about 200 subscribers, a further two exchanges had been opened at Leadenhall Street in the City, and at Westminster. The same year, the company also opened telephone exchanges in Glasgow, Manchester, Liverpool, Sheffield, Edinburgh, Birmingham and Bristol.

The Williams switchboard had been imported from America and consisted of two vertical panels carrying the indicating mechanism. Immediately in front of these were two operators’ tables each provided with a transmitter and receiver, and connecting, earthing and battery keys. Numerous horizontal brass strips – grouped in pairs and containing holes for the reception of circular pegs – extended across the upper portion of each panel. The lower portion contained three rows of indicators or ‘drops’ – the front portion of each drop consisting of a small metal door hinged at the bottom. Immediately beneath each drop was a ‘slipper’ – this consisted of a small flat brass spring that made contact with a brass plate connected to earth through the indicator. In addition there was a set of flexible cords each terminating at one end in a circular brass peg and at the other end in a plug called a ‘flat jack’. The flat jack was a small brass plate secured to a piece of insulating material.

When a subscriber wished to get in touch with the exchange he pressed a calling button on his instrument. Pressing the calling button caused a battery current to be transmitted over his line to the slipper associated with his telephone number on the exchange switchboard, where the opening of the door of the indicator notified the exchange of his call.

By the 1930s London was connecting the World via The Overseas Telephone Exchange, London. This provided connections to 95% of the world’s telephone subscribers. 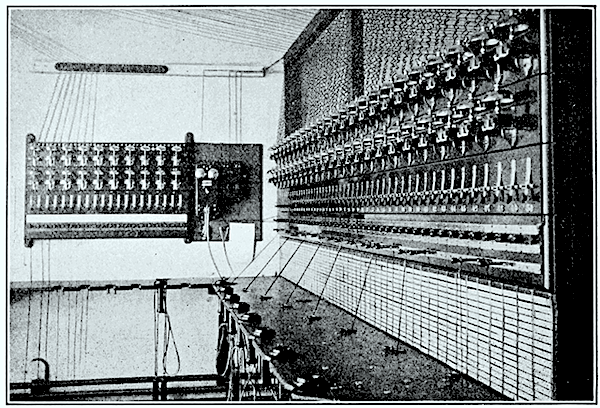