The Battle of Gazala in the Western Desert in the late spring of 1942 was hard-fought. Ultimately the German and Italian troops of Panzerarmee Afrika were successful against the British, South African, and Indian troops of the Eighth Army, which withdrew eastward, finally making a stand at El Alamein.

The fighting around the defensive position known as ‘Knightsbridge’ had been particularly fierce and six Military Medals were earned by Royal Signals junior ranks from various units. Signalman I P T Cobley was the radio operator for the commander of 13th Corps, Lieutenant General W E J Gott.

Whilst returning to the unit lines through an enemy leaguer about four miles south of the Knightsbridge box, the vehicle came under heavy fire from the enemy. Gott was wounded slightly, and the armoured car put out of action by a shot through the steering box. Still under fire, Signalman Cobley remained at his post during the night, only leaving when ordered to do so. Having destroyed his set, with the corps commander and the crew of the armoured car he walked back to British lines.

In the shake-up of senior commanders that following in August 1942, Gott’s performance in the Western Desert resulted in his appointment as the commander of the Eighth Army. On 7 August Gott was the last passenger to climb aboard an RAF Bristol Bombay at the desert airstrip at Burg-el-Arab. The passengers were mainly wounded men being evacuated to Cairo. Just after take-off, the aircraft was attacked—the pilot managed to land but was unable to bring it to stop for several miles. As it slowed, the Bombay was attacked again and badly shot up. Only five of the 19 on board managed to escape. Amongst those killed were Lieutenant General Gott, and Signalman Joseph Taverner Cox from 30th Corps Signals. The remains of Signalman Cox were interred with 12 others in a collective grave in El Alamein War Cemetery; Lieutenant General Gott is buried separately nearby. 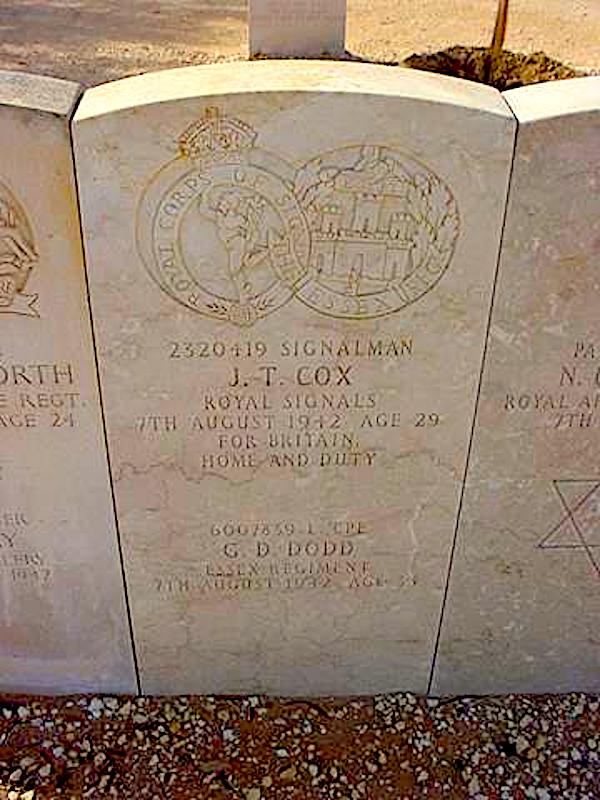