On this day in 1963 the United States launched the Telstar 2 communications satellite on behalf of its private owner, AT&T. On its tenth orbit, it transmitted the first transatlantic TV program seen in colour. It orbited with an apogee of 6,700 miles (10,800 km). This superceded AT&T’s original Telstar satellite, which had ceased operating in 1962, due to transistor damage caused by radiation from a high-altitude nuclear test. Telstar 2 was built with shielding against such radiation.

The role of 647 Signal Troop

Three years later in 1966 , the US military gained its first subsynchronous communications system with the launch of their first Defence Satellite Communications System (DSCS) satellites. The MOD had been invited to participate in the project and 647 Signal Troop was formed, deploying to Singapore in May 1966. The station consisted of a large number of containers and numerous large wooden pallets on which were loaded the petals for the 40ft dish and inflatable segments for the 60ft radome. With the aid of two Marconi engineers, a heavy-lift crane and a forklift truck, they assembled the station, commenting that it was like putting together a giant Meccano set!

Overall the project was very successful and the station was handed over to the RAF in January 1968. Subsequently 2 transportable satellite communications (TSC) 500 stations (a TSC 500 troop is pictured left) were established in 14th Signal Regiment and the first 2 Skynet satellites were launched in November 1969. In 2020 the equivalent communications could be carried in a manpack! 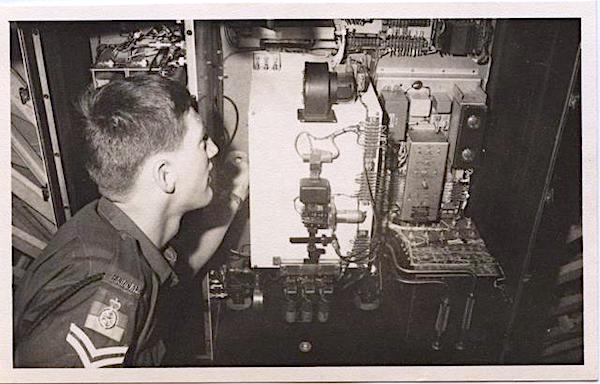