On the 7th September 1940 the Blitz began

On this day in 1940 Germany started its Blitz on London; the first of 57 consecutive nights of bombing. More than 300 German bombers bombarded London. The Blitz caused the deaths of  many civilian men, women and children and left a million homes destroyed in the city.

The inaccuracy of celestial navigation for night navigation and target finding in a fast moving aircraft, led the Luftwaffe to develop radio navigation devices; subsequently the British developed  countermeasures. Bomber crews already had some experience with the Lorenz beam, a commercial blind-landing aid for night or bad weather landings. The Germans adapted the short-range Lorenz system which used two Lorenz beams but with much stronger signals. Two aerials at ground stations were rotated so that their beams converged over the target. The German bombers would fly along either beam until they picked up the signal from the other beam. When a continuous sound was heard from the second beam the crew knew they were above the target and dropped their bombs.

The British counter measures were carried out by Electronic Counter Measures (ECM) units under Wing Commander Edward Addison, No. 80 Wing RAF. The production of false radio navigation signals by re-transmitting the originals became known as meaconing using masking beacons (meacons).  Up to nine special transmitters directed their signals at the beams in a manner that subtly widened their paths, making it harder for bomber crews to locate targets. German beacons operated on the medium-frequency band and the signals involved a two-letter Morse identifier followed by a lengthy time-lapse which enabled the Luftwaffe crews to determine the signal’s bearing.

The meacon system involved separate locations for a receiver with a directional aerial and a transmitter. The receipt of the German signal by the receiver was duly passed to the transmitter, the signal to be repeated. The action did not guarantee automatic success. If the German bomber flew closer to its own beam than the meacon then the former signal would come through the stronger on the direction finder. The reverse would apply only if the meacon were closer. In general, German bombers were likely to get through to their targets without too much difficulty. It was to be some months before an effective night-fighter force would be ready, and anti-aircraft defences only became adequate after the Blitz was over, so ruses were created to lure German bombers away from their targets.

Throughout 1940, dummy airfields were prepared, good enough to stand up to skilled observation. For industrial areas, fires and lighting were simulated. It was decided to recreate normal residential street lighting, and in non-essential areas, lighting to recreate heavy industrial targets. 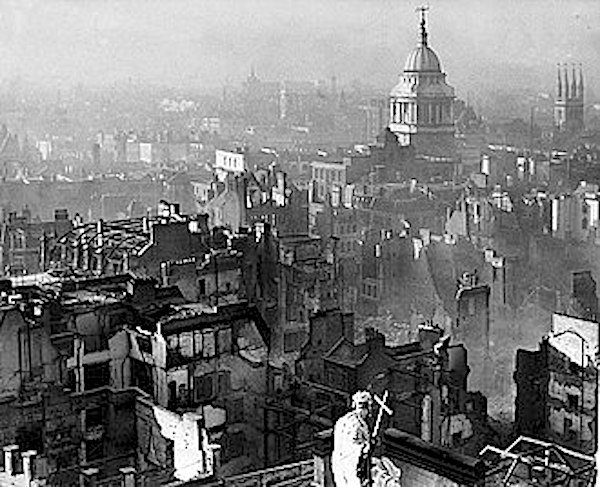 Video above features a short Pathe news reel. Below is a full length feature of the first day of the Blitz and German tactics.