Operation Charnwood was intended to capture the German-occupied city of Caen – an important objective for the Allies during the opening stages of Overlord. It was also hoped that the attack would forestall the transfer of German armoured units from the British sector to the American sector to the west, where an offensive was being prepared.

Operation Charnwood began at dawn on 8th July with three infantry divisions attacking German positions north of Caen, behind a creeping barrage – resulting in the capture of Caen – a month later than originally planned, A  major offensive, taking place on the 8th and 9th July 1944, it was part of the larger WW2 Operation Overlord.

Supported by three armoured brigades, the British 1st Corps made gradual progress and by the end of the first day the 3rd Canadian Division and the British 3rd Infantry Division and 59th (Staffordshire) Infantry Division had cleared the villages in their path and reached the outskirts of the city. A controversial bombing raid that day destroyed much of the historic Old City of Caen,

Moving into Caen at dawn on the 9th July, the Allies encountered resistance from remnants of German units who were beginning a withdrawal across the Orne.

The British and Canadians advanced on a broad front and by the evening they had taken Caen up to the Orne and Odon rivers.

Carpiquet airfield fell to the Canadians during the early morning and by evening, the British and Canadians had linked up along the north bank of the Orne. The remaining bridges were defended or impassable and with German reserves positioned to oppose their crossing, 1st Corps ended the operation.

Operation Charnwood was mutually costly but a tactical success for the Allies. The Germans retired from north of the Orne River but did not stop sending formations to the American front. The Germans established another defensive line along two ridges to the south of the city. The Allies maintained the initiative and began Operation Jupiter the next day and Operation Goodwood and Operation Atlantic a week later, in which the rest of Caen was secured. 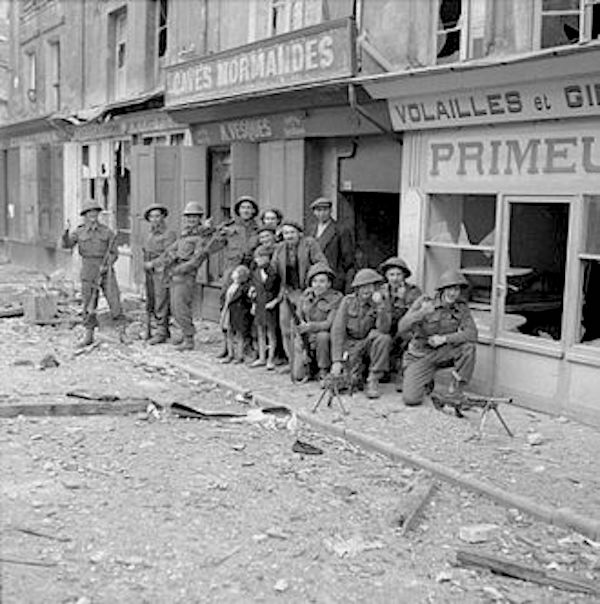