On the 9th December 1917 Jerusalem was surrendered to the British

General Allenby launched the Third Battle of Gaza on 1st November 1917. After impressive victories at Gaza, and Beersheba, his forces moved on to Jerusalem. The initial offensive in mid-November stalled but a renewed attack on 7th December proved successful against a demoralised and weary Ottoman army.

The Ottoman forces in the city surrendered and the Mayor of Jerusalem, Hussein Salim Al-Husseini offered the keys of the city to the British Forces on the 9th December in an attempt to protect the Holy sites from destruction.  On the 11th December, two days after the official surrender and exactly six weeks after the fall of Beersheba, Allenby made his formal entry into Jerusalem on foot through the Jaffa gate instead of by horse or vehicles to show his great respect for the holy place.

In November 1914, Turkey entered the First World War on the side of Germany, taking the war firmly into the Middle East. The British formed the EEF (Egyptian Expeditionary Force) in 1916 and the campaign to remove Ottoman control from the region began. After slow progress Prime Minister David Lloyd George appointed General Edmund Allenby to command the EEF in June 1917 following two failed Battles for Gaza. He demanded that Allenby capture Jerusalem by Christmas.

Sapper H P Bonser, Royal Engineers (Signals Service) was serving with the 74th Divisional Signal Company, then later U U Cable Section, prior to the advance on Gaza and Jerusalem in 1917. In his diary, he recorded the highs and lows of the Palestine Campaign.

‘September of this year found us on the borders of Palestine. The job was recovering and loading cable ready for the dash up. My pal and I found ourselves riding in an eight-horse cable team.  It was an exciting ride.  Straight down the side of a Wady and top speed at the opposite bank before the momentum was spent. About midday we clattered through Gaza, an untidy dilapidated Gaza from which most men had fled.  Here and there a dark face peeped stealthily from a doorway, but, apart from the troops hurrying through, it was a place of desolation. We trekked northwards, rigging up signal offices wherever we stopped, until we settled down in the Wady Surar as a transmitting office to the divisions.

It was a mud and misery winter.  Supply Lorries were stuck fast in the mud and supplies often scarce.  Our Christmas Day ration was two biscuits, a tin of bully to four, and a tin of jam to seventeen men.  We were sleeping in wet clothes, and even sleep was scarce, as pressure of work in the signal office necessitated us working all through every alternate night.  I had the additional misery of neuralgia.

“Three telegrams I handled that winter stick in my memory.  One was from General Allenby to the 60th Divisional General when Jerusalem was taken. It read
Congratulations.  Psalm 122, v. 2
I looked it up.  “Our feet shall stand within thy gates, O Jerusalem.”
I thought it rather decent of Allenby. The other two struck me by their contrast to one another.  One wet and shivery night I handled a telegram from a G.H.Q. general asking for his hot-water bottle to be collected from Fast’s Hotel, Jerusalem, and forwarded by despatch rider, as the nights were chilly.  The next telegram was from 163rd Brigade reporting how many men had died of exposure during the last twenty-four hours.’ 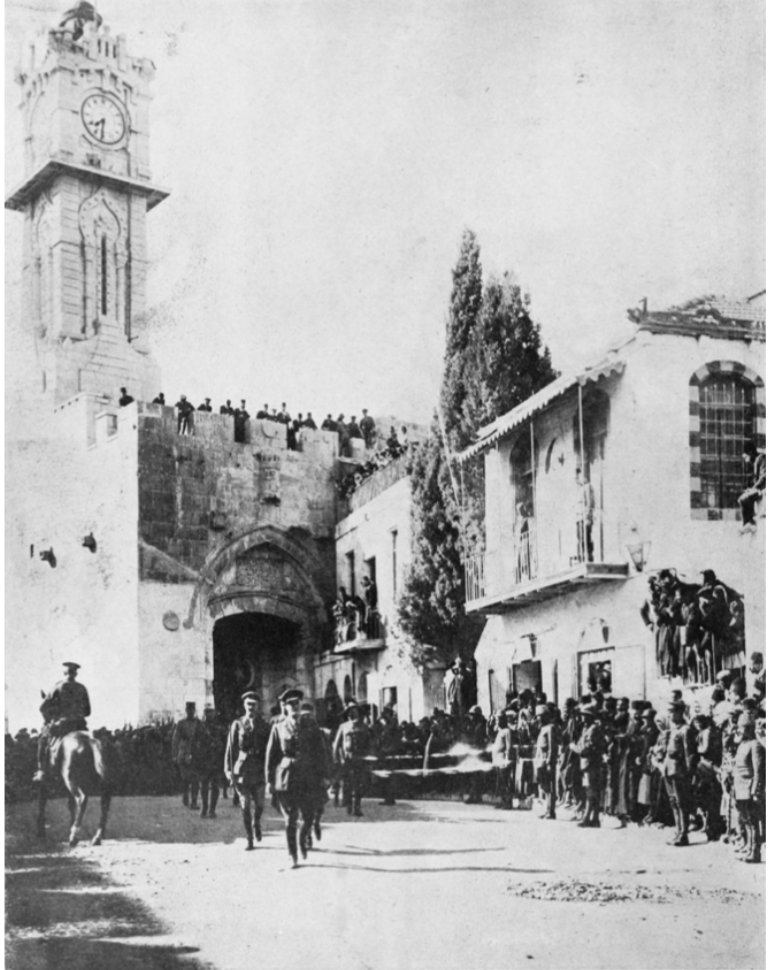 This work is from the Library of Congress. According to the library, there are no known copyright restrictions on the use of this work.
Images submitted for copyright by Underwood & Underwood are in the public domain in the United States due to expiration or lack of renewal. (Wikipedia)