Prior to the formation of the Corps

In 1914 the Royal Flying Corps began to use wireless to direct artillery fire. An example of the Marconi transmitter – which would fit into an aircraft and send morse signal to be picked up on the ground – is held in the Museum.


Signalling flags were normally blue and white with variations in the length of the poles, size and material from which the flags were made. A competent operator could reach about 12 words per minute.

The No. 10 set made use of newly developed radar techniques to carry eight channels over any obstacles between land and line links. .

The museum features many exhibits from WW1 and WW2 including communications equipment, personal memorabilia and the stories of signallers, both men and women. We outline some key kit and systems below but this is not an exhaustive list. We are always keen to hear from communication specialists who can add to our body of knowledge, or from those who have equipment they would like to donate, please do contact us.

In 1912 the Royal Engineer Signal Service was formed with responsibility for all forms of signalling; visual, telegraph, telephone, signal despatch and later wireless communications. They communicated from HQ down to Brigades (and for artillery) down to Batteries. Throughout most of The Great War the primary means of communications were visual, telegraph and despatch, with most despatch carried out either via runner, horseback or motorcycle.

The use of visual signalling in warfare

The main types of visual signalling were flags, lamps, lights, and heliograph. Signalling flags were normally blue and white and varied in size and material used. These variations affected the speed at which the operators could send their message. Using lightweight silk flags a competent operator could reach about 12 words per minute. However, visual signalling was generally considered unsuitable for trench warfare as the operator had to show himself. The heliograph, flags and lamps (all of which are on display at The Museum) played an important communications role, particularly where the army was moving too quickly to establish a telephone network. In 1915 signalling discs and shutters were introduced. These could be operated from cover and read using a periscope.

The paraffin-burning Begbie Lamp was used from 1880 until 1915. The lens concentrated the light so that it could be used over great distances. A Begbie Lamp is on display at the museum.

The military telephone and wireless

By the outbreak of WWI the army had a small number of wireless sets. These were mainly heavy, cumbersome, unreliable spark transmitters which operated on long wave. In 1914 the Royal Flying Corps began to use wireless to direct artillery fire. An example of the Marconi transmitter – which would fit into an aircraft and send morse signal to be picked up on the ground – is held in the Museum.

In 1915 trench sets were used on the western front but were not a great success – in part because the enemy could easily overhear the messages. A trench reconstruction can be seen in the Museum.

On display in the museum 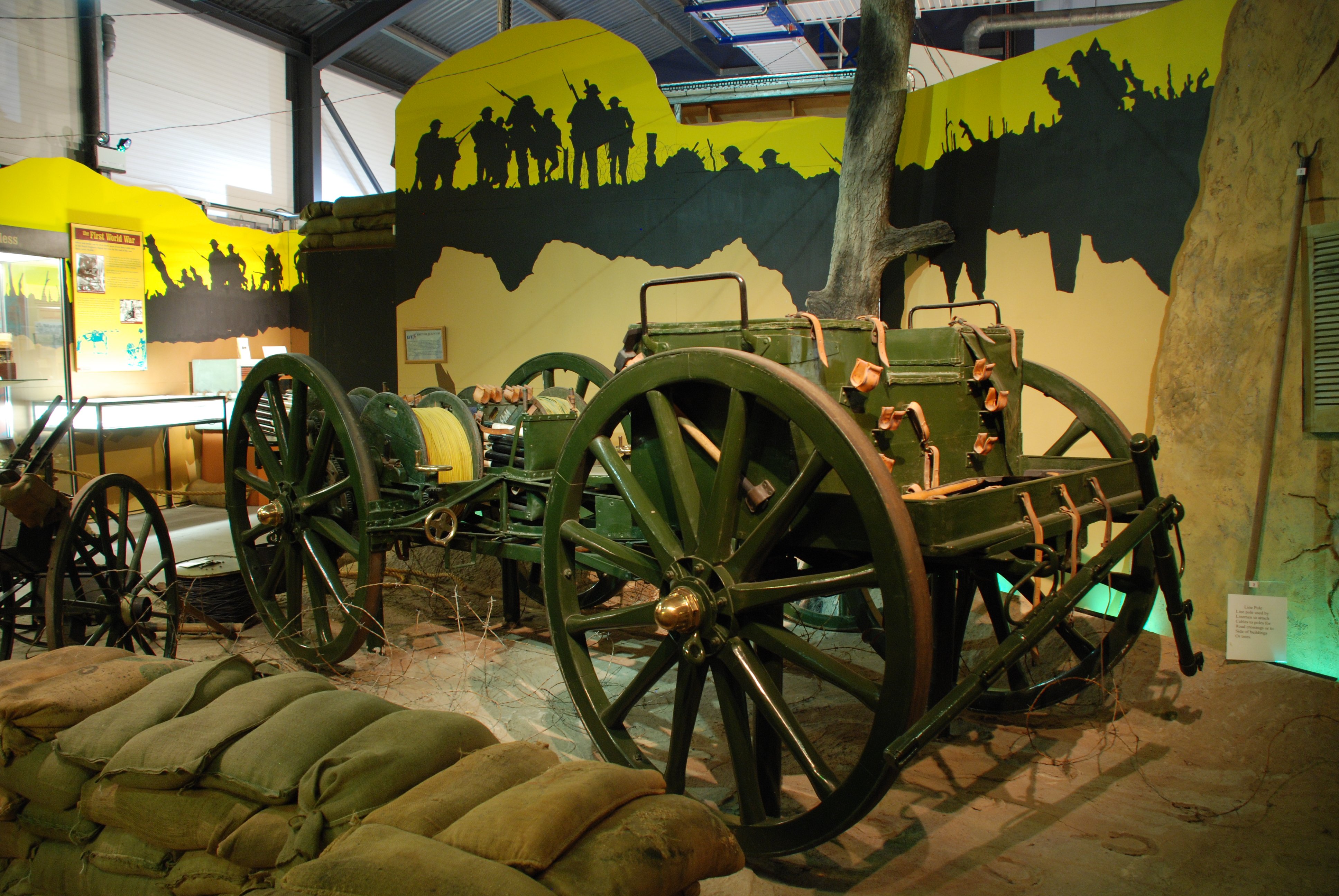 A WW1 cable wagon on display in the museum. 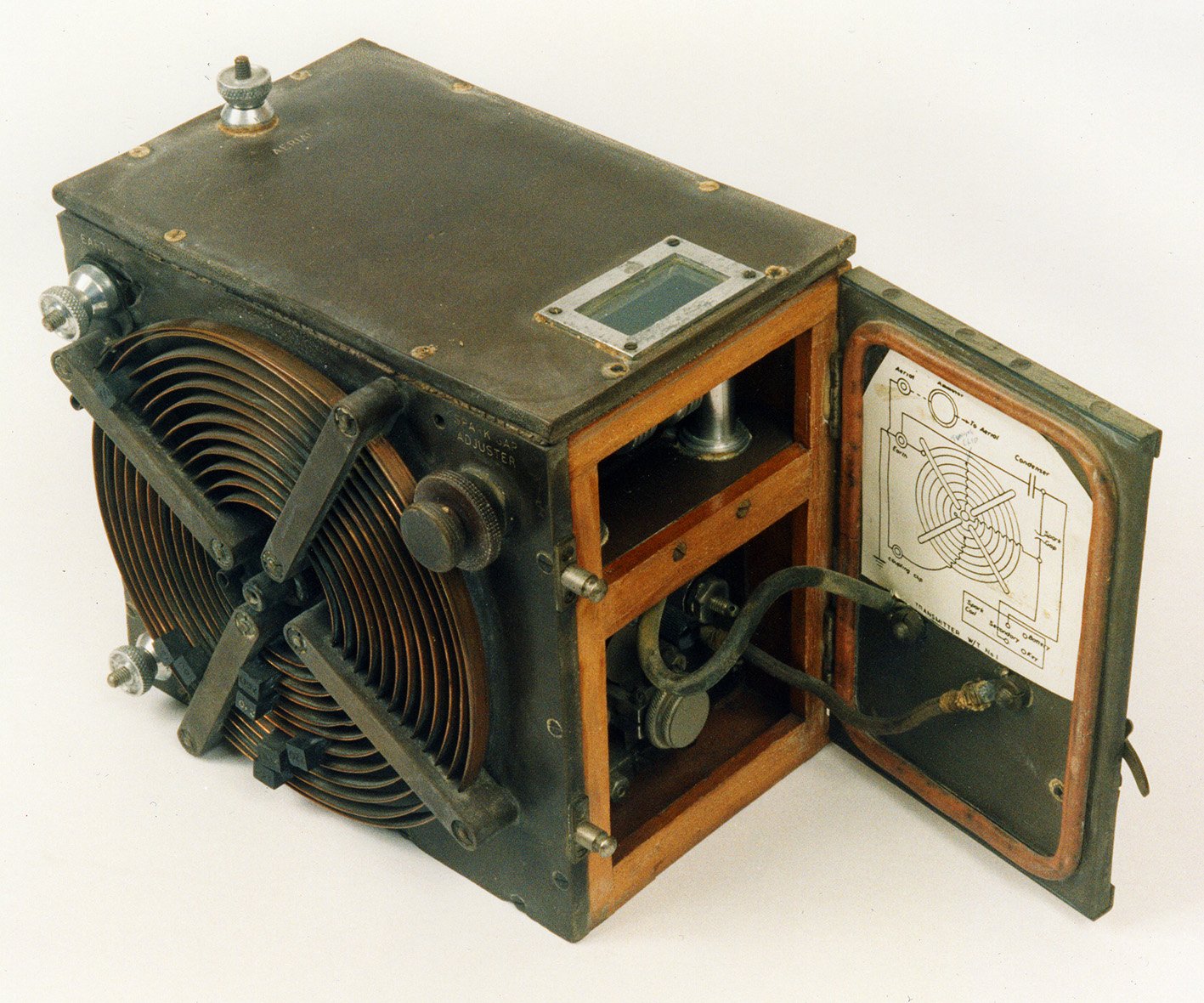 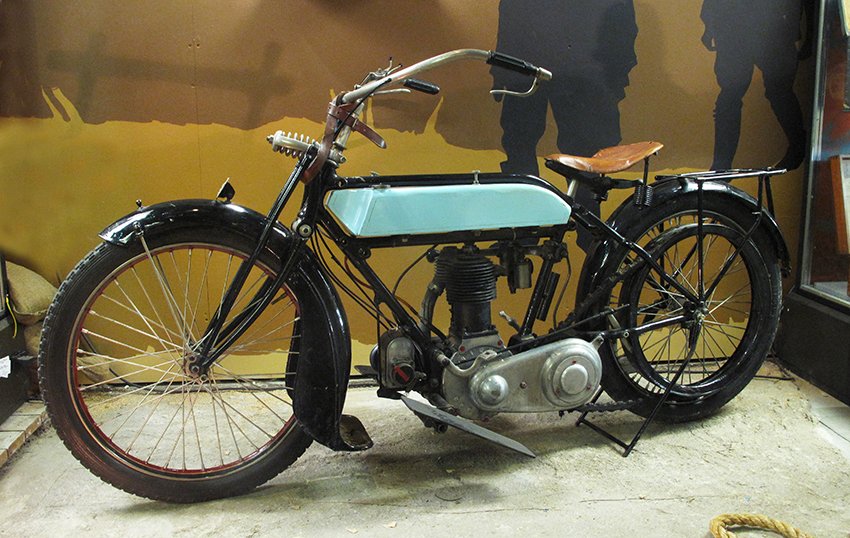 Telegraph Troop was formed as a mounted unit with horses being used as draft animals until 1937. A life size model of a horse carrying an early military wireless stands in the Museum.

Dogs were trained to carry messages between trenches and horses, mules and dogs were all used in war to lay cables.

Homing pigeons have been used to carry messages since Roman times and before the days of telegraph and wireless were an essential method of carrying messages back to an established Headquarters from the front line.

Pigeon 2709 was a typical example of the bravery of these birds. In 1917 during the Battle of Passchendaele Pigeon 2079 was despatched from the front line to carry a message back to Headquarters some 20 minutes flying time away. Shortly after setting off Pigeon 2709 was hit by enemy fire. The bullet broke a leg and passed through his body, leaving the small metal message cylinder embedded in his side. It took him a further 21 agonising hours to successfully complete his mission only to die of his injuries the following day.

In World War Two 250,000 homing pigeons were brought into service and used for a variety of purposes including communicating behind enemy lines. Thirty-two pigeons were awarded the Dickin Medal for Valour, this included William of Orange a pigeon who in 1944, when other forms of communication had failed, was released by British soldiers at Arnhem. He flew 400km back to the UK in just under four and a half hours carrying a vital message.

The British Army had many Pigeons bringing back messages from the front line. Stories of heroic pigeons such as Pigeon 2709 and William of Orange can be read about in the Animals in War Section  at the museum and items such as the parachute used by pigeons and medals awarded to pigeons for outstanding flight, can be seen in this display.

The Trench Signalling lamp was in a wooden case and was battery operated. It had a bulls eye lens to concentrate the light and had a morse key to switch the lamp on and off. It was used mainly for local use from trench to trench and operators would receive the message through a periscope or telescope. It was always extremely dangerous to transmit towards the front of the battlefield as this would attract enemy rifle fire.

The Mark 236 was self contained with its own instrument, calling generator, night bell and speaking set. two or more could be set up in tandem to increase the number of subscribers. Having given excellent service until 1918 it went on to serve during the Second World War. The UC was a portable field switchboard which had 10 discreet units. This allowed for repair of one unit without disturbing the remaining subscribers.

At the beginning of the war civilian telephones were pressed into front line services. However, they were not designed to operate in damp, muddy conditions. The telephone D Mark III became the standard army field telephone an example of which is displayed in the Museum. It incorporated a buzzer unit and a morse key so it could be used to send and receive morse if the circuit was too noisy for voice transmissions. 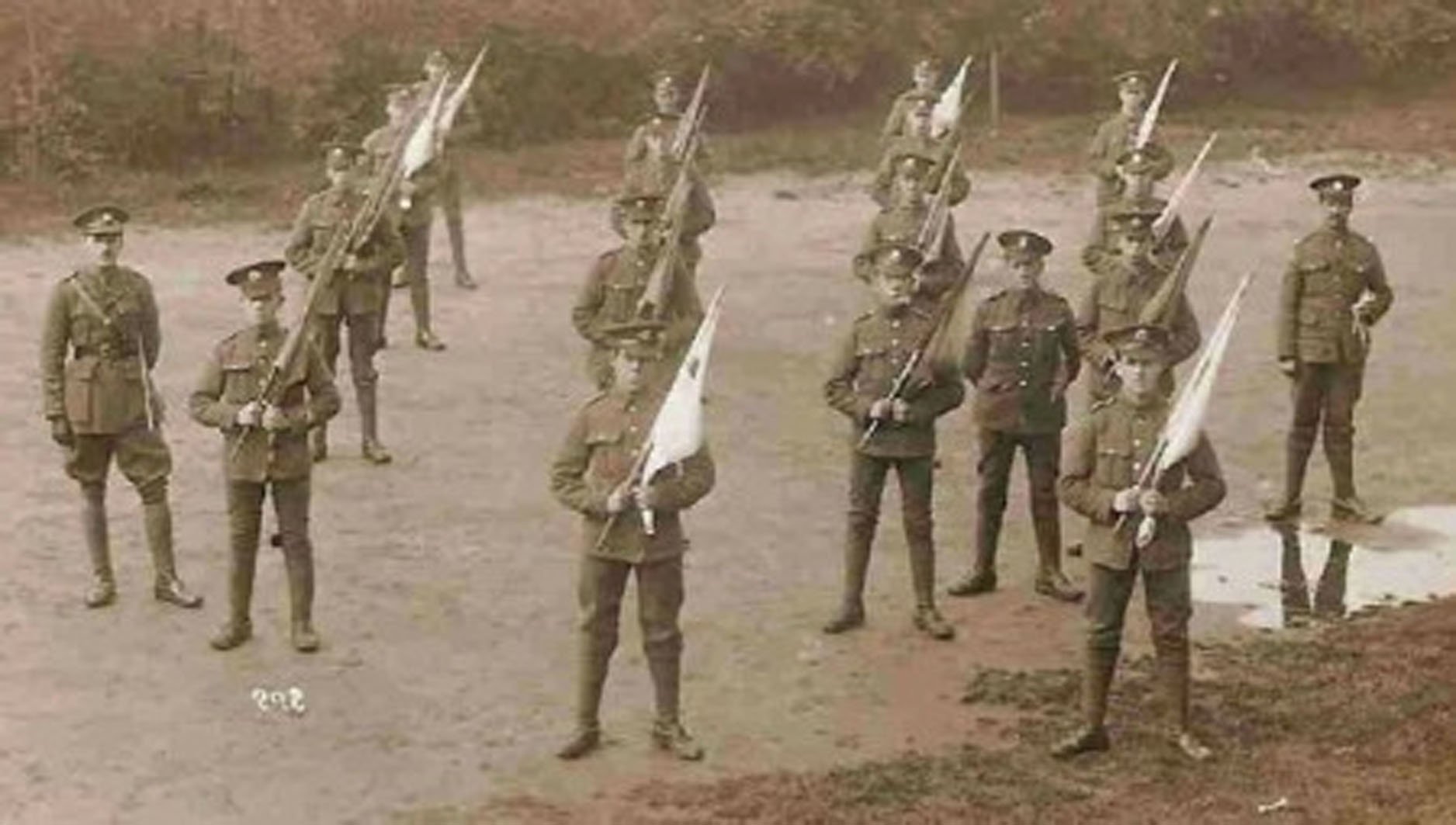 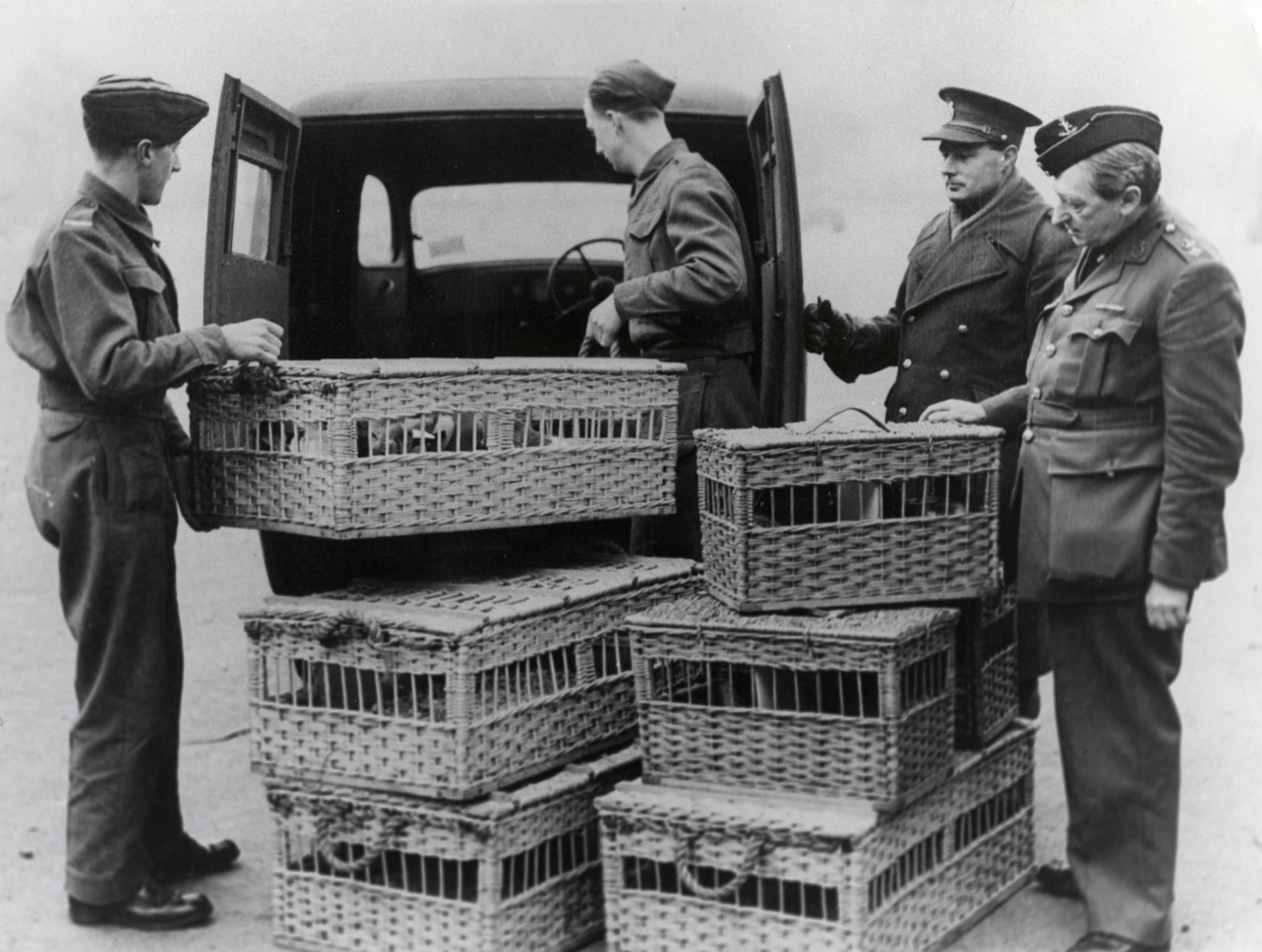 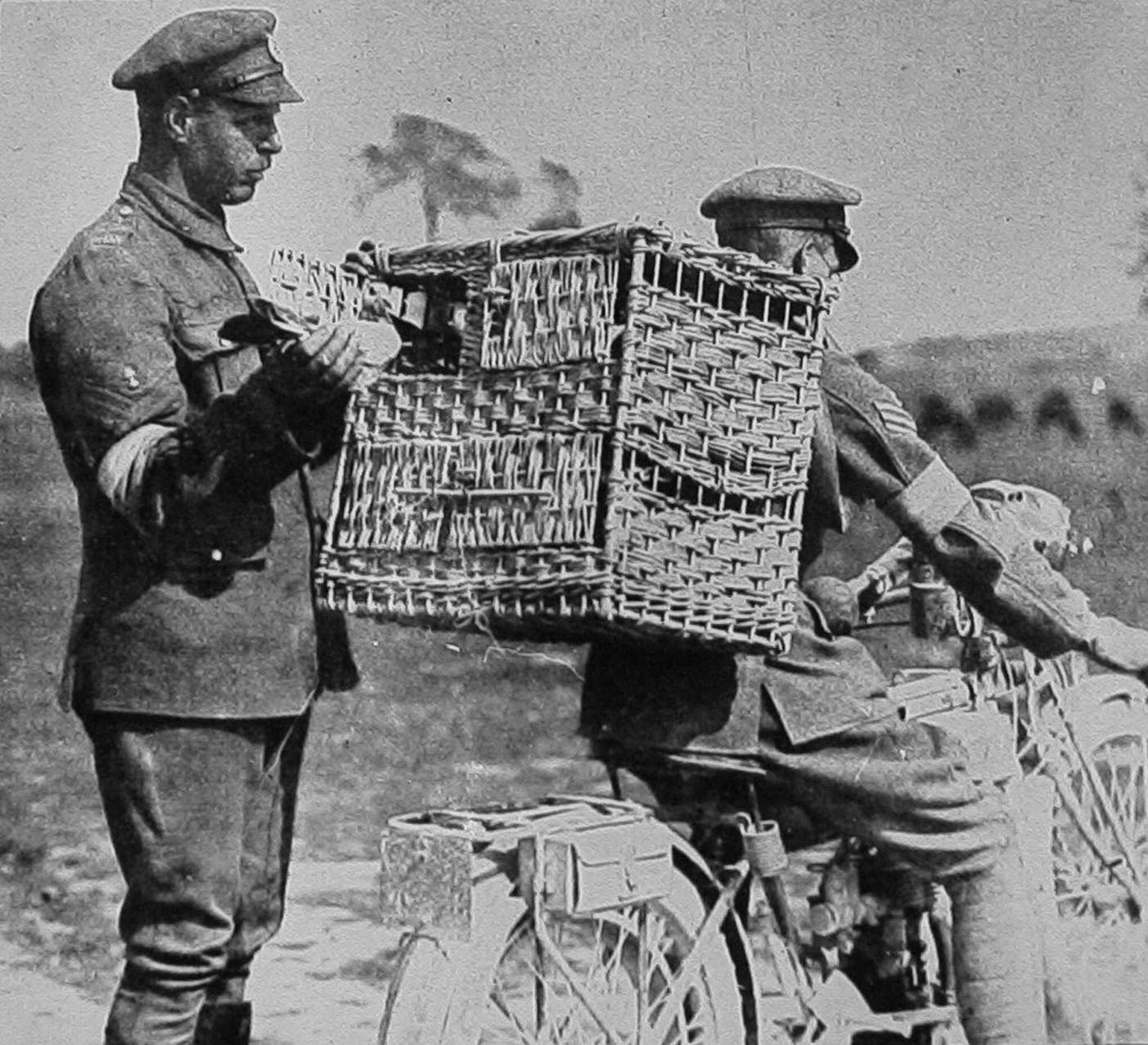 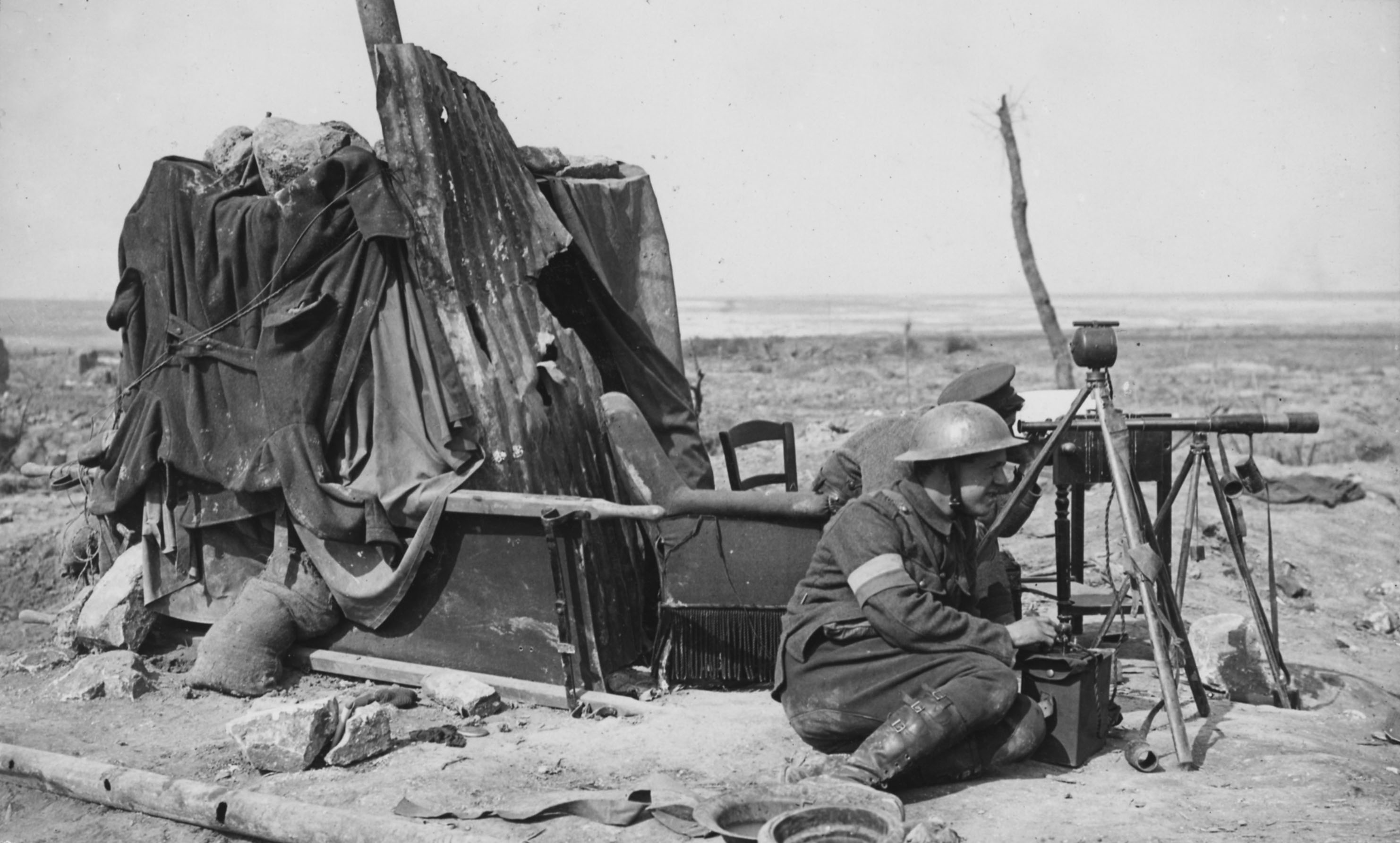 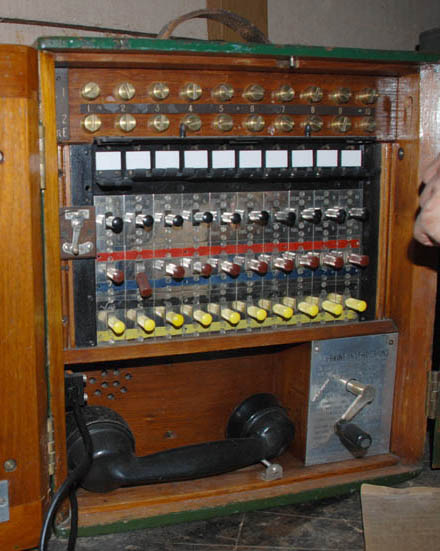 When the Second World War broke out, the Army was ill equipped. Royal Signals units went to France with the British Expeditionary Force in 1939. Some of the Signallers were not fully trained and much of the equipment was obsolescent. In 1940 the civilian telephone system was used in France and Belgium as messages were less likely to be intercepted this way.

The importance of the No10 set

As the Allies moved through North West Europe, Royal Signals laid hundreds of miles of telephone and telegraph cables and made use of civilian networks wherever possible. Communications to the United Kingdom were made via a cable laid under the Channel connected to signal stations at Bayeaux and Cherbourg.

The No. 10 set made use of newly developed radar techniques to carry eight channels over any obstacles between land and line links. Numerous radio sets are on display in the Museum including the original No. 10 set.

The North African campaign was fast moving and Royal Signal units had to lay and retrieve telephone cables and establish wireless links at great speed. Lessons learned in the desert proved invaluable in the mobile warfare which followed the Normandy landing in June 1944.

An Armoured Command Vehicle (ACV) equipped with signalling units and used throughout campaigns in North Africa and Italy can be viewed in the Museum.

The War in the Far East

Over 100,000 Allied Prisoners Of War were held by the Japanese in appalling conditions. Lieutenant Tom Douglas built an illicit receiver while a Prisoner Of War at Burma Railway. It helped keep POW’s informed of the events of the War and is now held in the Museum along with various artefacts brought back to Britain by POWs. 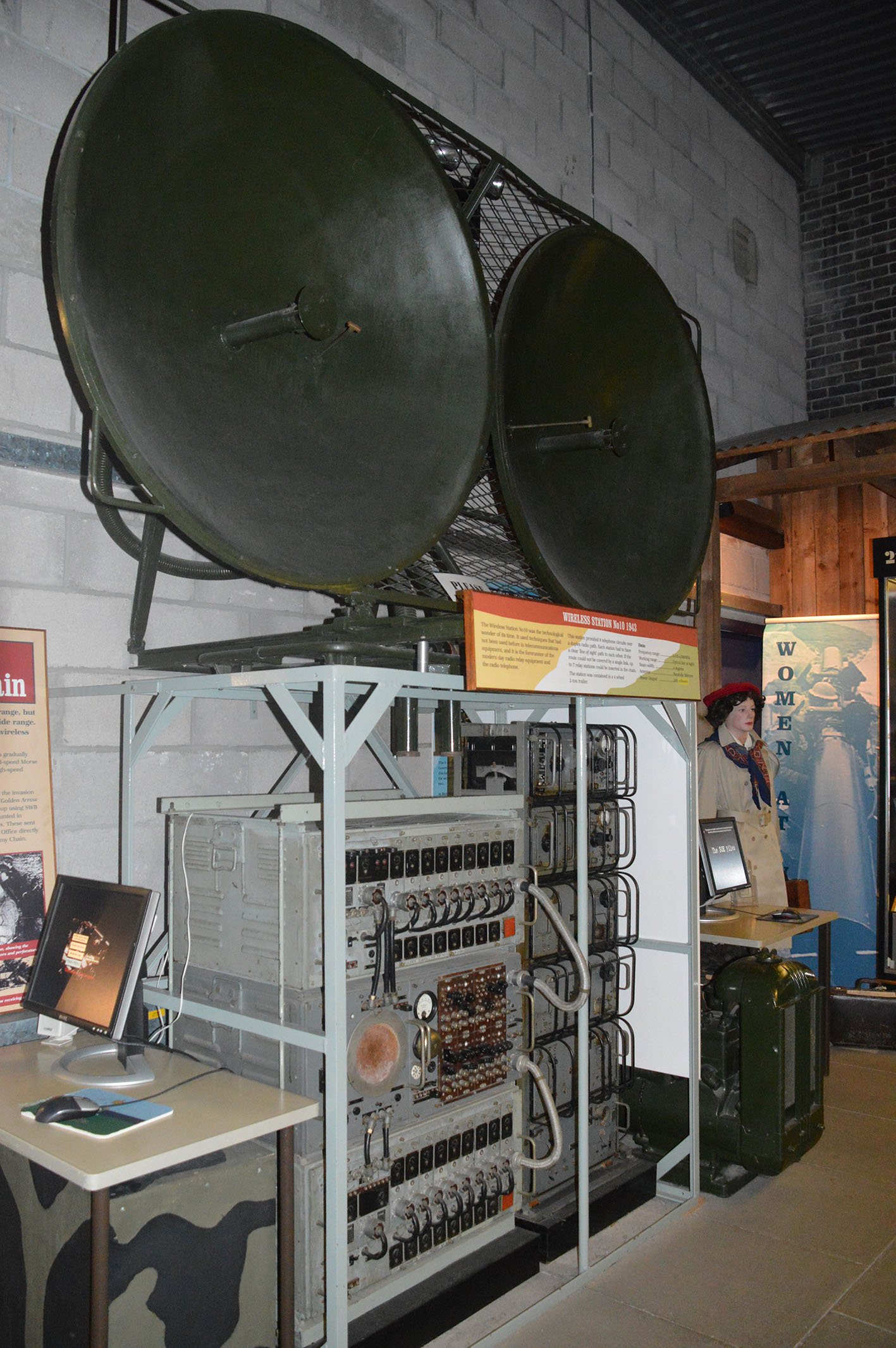 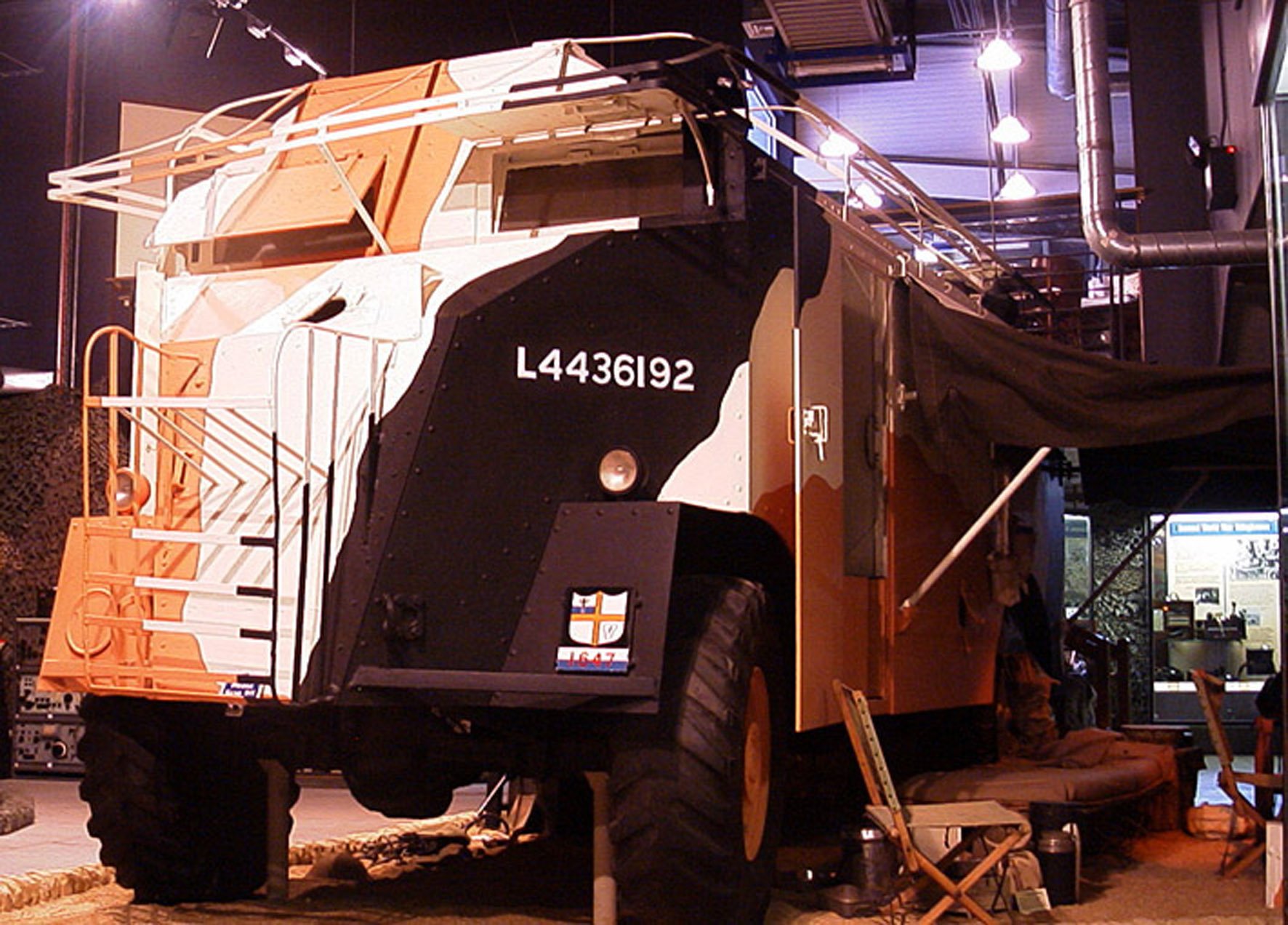 Wireless Set No 10 was a mobile self-contained radio station providing eight duplex telephone channels over a radio (microwave), line-of-sight link. Field Marshal Montgomery thought very highly of the No 10 set, since it enabled him to have direct and secure communications with London from his forward 21st Army Tactical HQ.

Both sides used machines to encrypt messages. The Germans had the Enigma machine, the British used Typex. Intercepted signals were usually in code and had to be deciphered. The resulting intelligence, code named Ultra, had to be carefully used to ensure that the Germans did not realise their codes had been broken. The breaking of the Enigma code played a major part in the Allied victory.

This is a high performance super heterodyne receiver that was used in fixed locations. It could intercept voice and morse code transmissions in the range 60 kHz to 30 MHz. It was made by Marconi. It is typical of the equipment that was used in the war of interception. 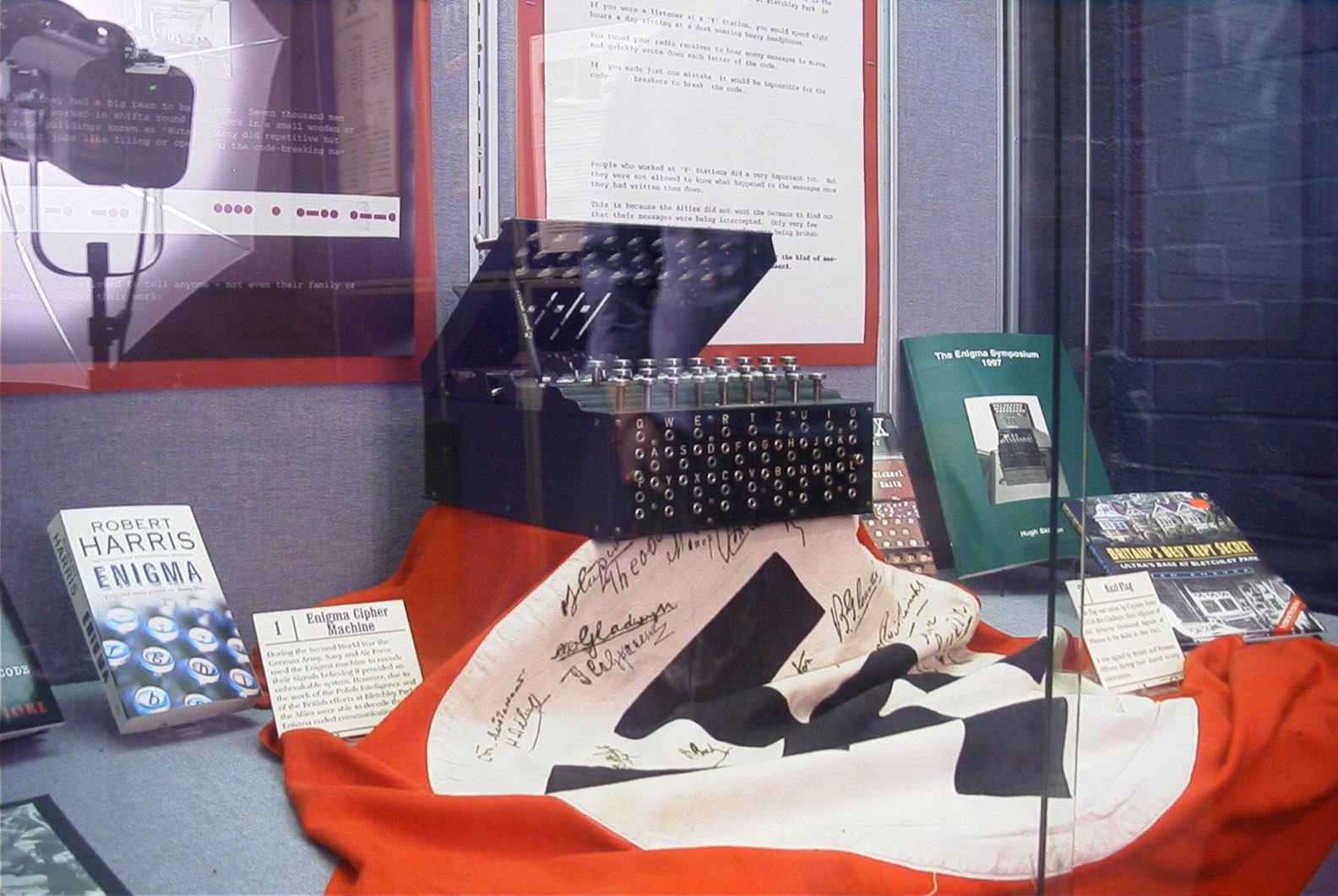 Different types of cipher machines are also on display in the museum these include the Mark III suitcase set (not shown). Weighing 9lbs it was built in 1944 and was the smallest transceiver conceived during the Second World War. 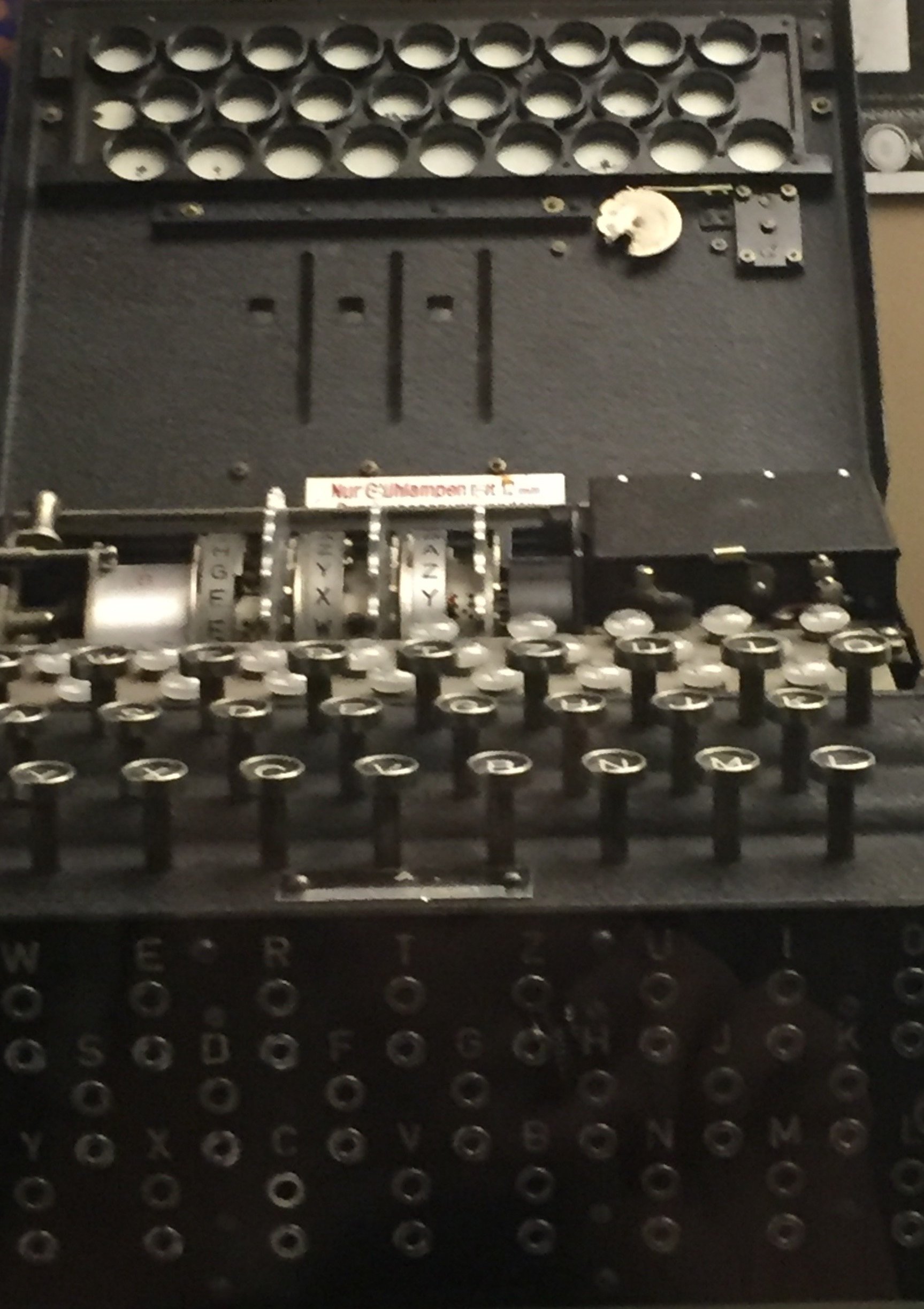 An Enigma Machine on display at The Royal Signals Museum. The breaking of the Enigma code played a major part in the Allied victory.

During the Second World War, troops were dropped by parachute or glider for the first time. British Airborne Forces were first used on the Bruneval raid in February 1942. The equipment of the Airborne Signals had to be portable so it could be carried by man in a hand-cart or in a jeep and trailer. 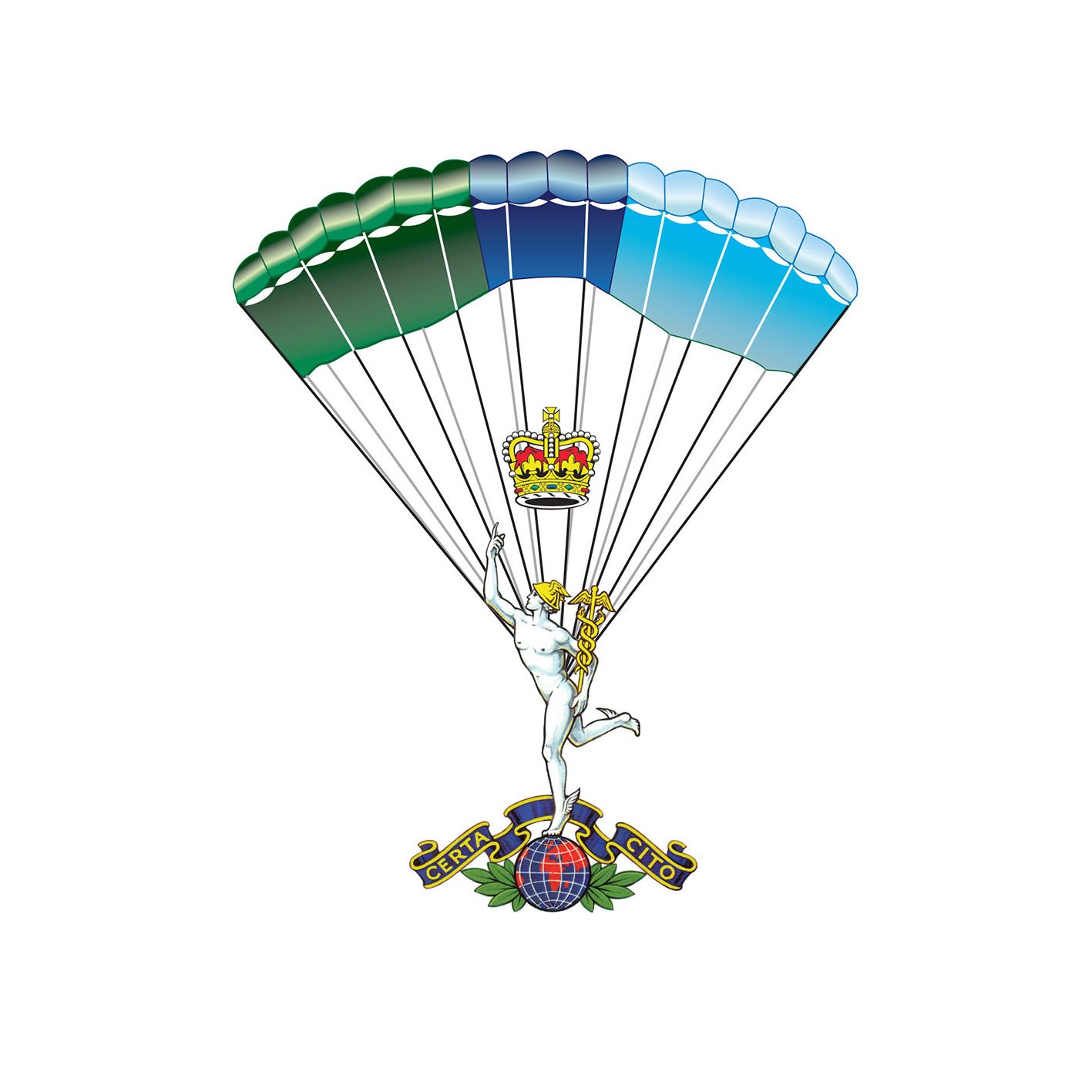 The Cap badge of the Corps Parachute Team